Eilidh told us… Due to the Coronavirus Pandemic we got married in my parents’ garden. They live in Rhu, Scotland and we were able to go to Royal Northern Yacht Club, Loch Lomond and the Glen near our house for lots of spectacular photos. 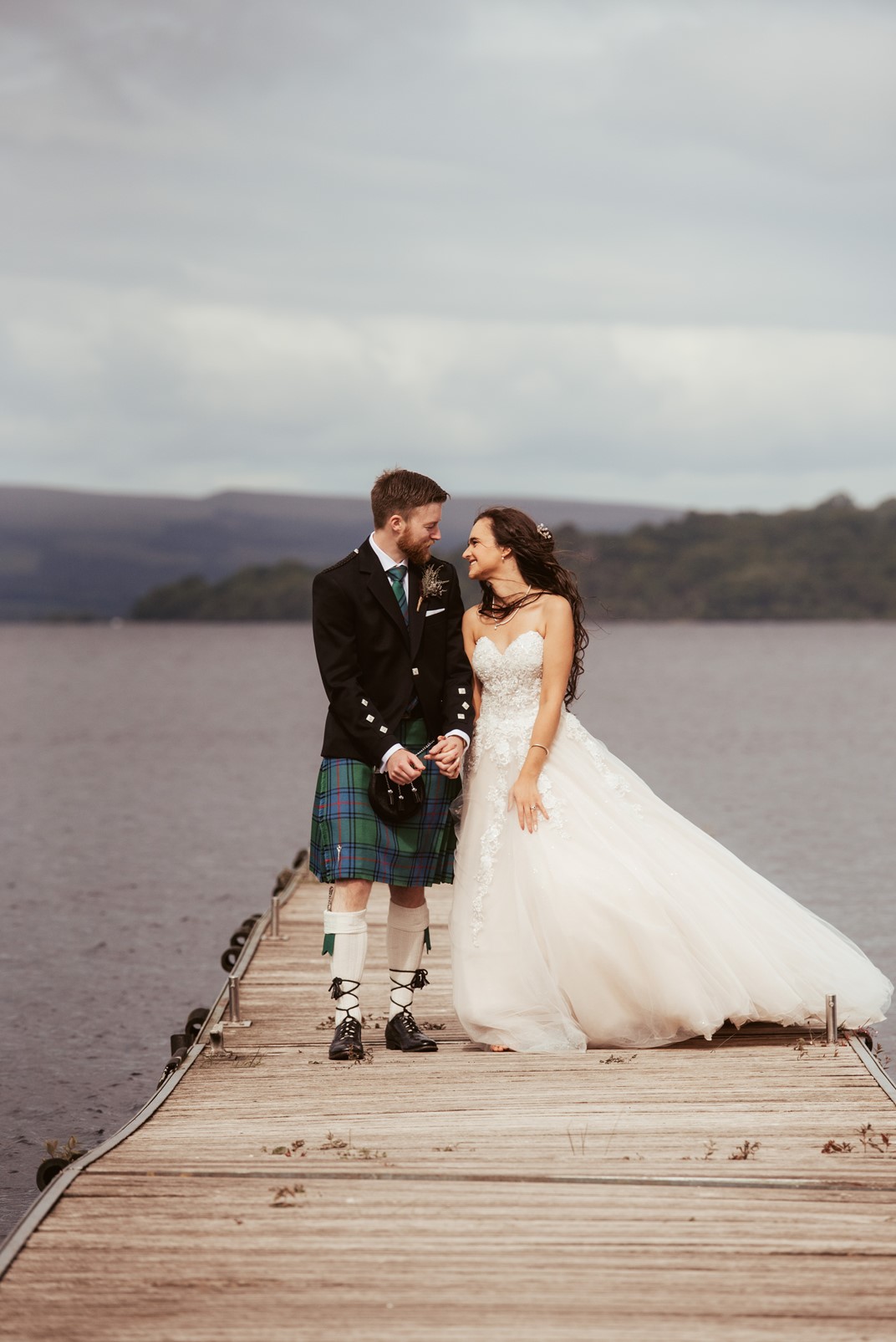 Robert and I met at Glasgow University at a Halloween party in 2014 when our respective university societies had a joint party. We then danced together for a St Andrews Day Ceilidh. Rob told me he would get me the moon, he’d throw a lasso around it and pull it down. Having never seen ‘It’s A Wonderful Life’, I just thought he was very romantic, he admitted it was a line from a film, but said he would make a point of making me watch it. We had our first date a few weeks later in the Grosvenor in Ashton Lane where we had a three-course meal and watched a film. We were pretty much inseparable from that point, until 5 months later when I moved to France to continue my studies. We stayed in a relationship and spent 11 months long distance, only seeing each other 3 times. When I came home, we moved in together. 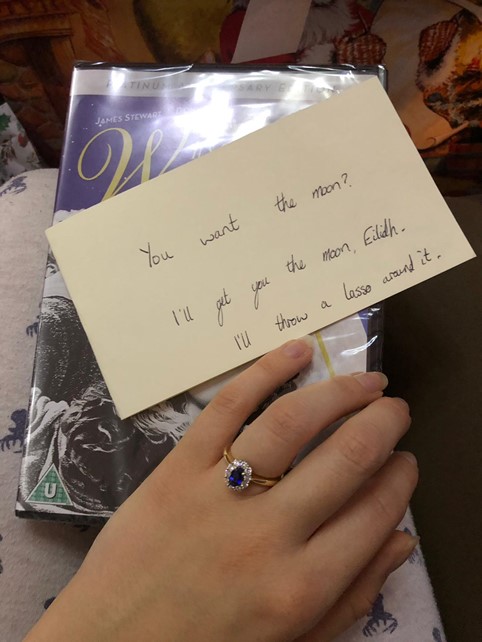 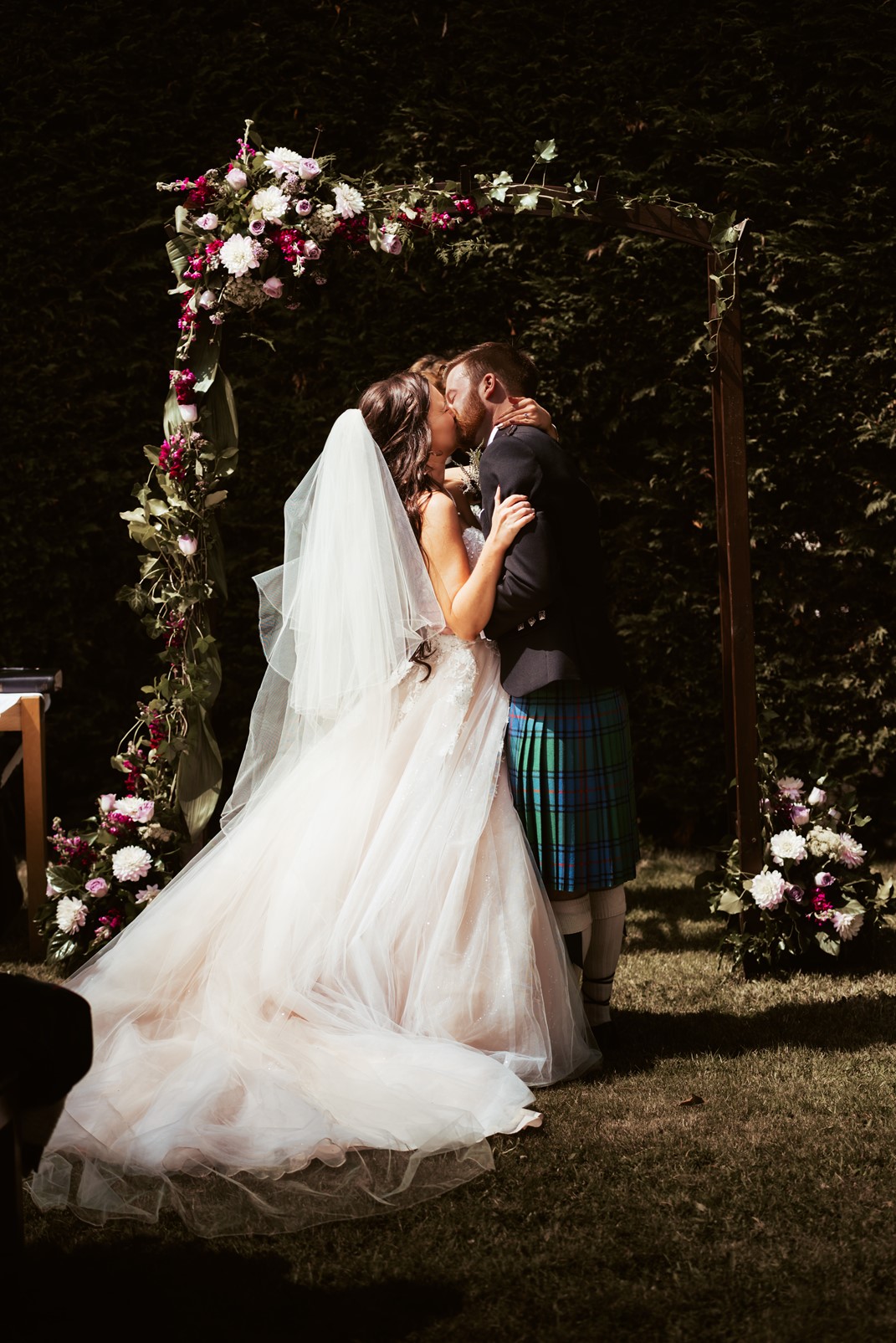 After I graduated in 2018, we moved to Edinburgh to start new jobs, and on the 24th of December 2018 before we headed back to our parents houses for Christmas, Rob asked me to meet him in Glasgow for dinner. We went back to the Grosvenor and had dinner and remembered 4 years before when we had had our first date. When we were leaving Rob asked me to marry him, under the twinkling fairy lights on Ashton Lane. I cried so much I could not even tell you what words he said. He came home to my parents with me, and he gave me a note, which I keep in my purse to this day which says “You want the moon? I’ll get you the moon Eilidh. I’ll throw a lasso around it”. He told me he had intended to take me to see the film It’s a Wonderful Life, but he gave me the DVD instead, so we can now watch it whenever we want. It was an excellent Christmas! 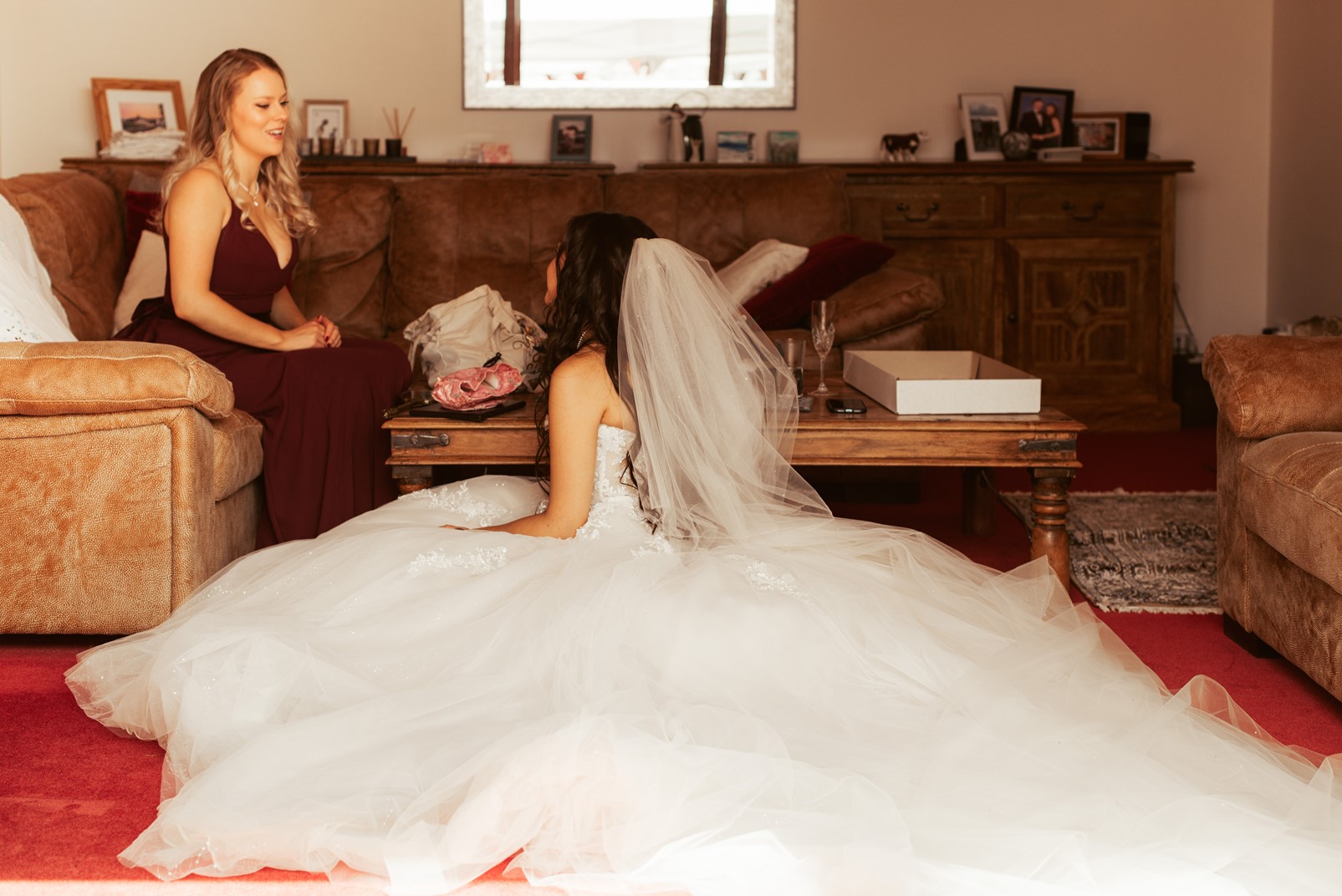 As for my wedding dress I didn’t really know what I wanted, BUT in August 2018, Rob and I ran away to Portugal for a week (we booked our flights at 2am and boarded at 6am) and on our last day we were walking down a little side street in Faro and I saw a beautiful wedding dress in the window with gorgeous lace and floral detailing. I snapped a photo and thought about it for weeks on end. We were not even engaged at that point – I’ll come back to this story! My mum and I went to one wedding dress shop; The Wedding Planner in Helensburgh. We had intended to go to more, but after realising how expensive weddings are I decided that I wanted to spend the money as close to home as I could. And KJ, the owner was so incredible I didn’t want to speak to anyone else once I had spoken to her. She was the most amazing person.

I ended up picking Ronald Joyce’s Caelyn (69407) dress. The experience of buying my gown was like no other experience in my life. I’m not one for dressing up much but was so excited for this. Mum and I went to the shop with four magazines where I had highlighted what I liked and I went through each one saying I like this, I love that etc. I told her I was probably wanting something very fitted, not strapless and no glitter. KJ ran around whipping out gorgeous dress after dress and I thought my eyes were going to burst. Right before we moved to start trying on the gowns, I showed her the photo of the dress I had seen in Portugal and asked her if she had anything like that. She looked hard for a minute then said, well I have a gown that arrived just this morning. It hasn’t been prepped yet; it’s not been steamed but we could give it a shot. She disappeared off and came back with this dress, literally taking it out the shipping packaging and saying oh no it’s so crumpled it’s maybe not right but we can give it a shot. She then said actually this gown ticks all the boxes for what you don’t want. I’ll just put it away, but it’s as close to your Portugal dress as I have. 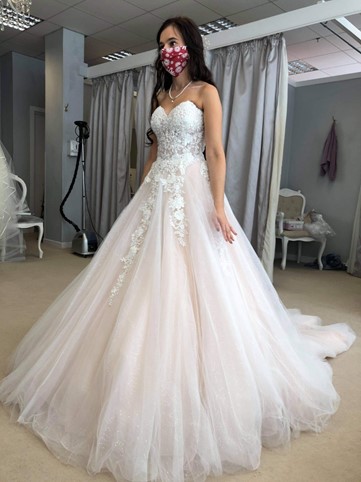 I decided I would give it a shot anyway, despite all my reservations. We decided to try this one on first, since it was everything I didn’t want, and that would help us speed confirm it and speed up the process. As soon as I put it on I panicked in the changing room and said “Oh my gosh KJ, I can’t fall in love with the first dress I try on, CAN I?” KJ looked at me from around the back of the gown as she was working on getting me in and said “Honey if it looks like that, you can!” I just felt in that moment like the dress was made for me. I had never felt as beautiful as I felt right then looking in the mirror. KJ left to sort a box for me to stand on and to get my mum to close her eyes and I just stared in the mirror for a few more minutes, just thinking oh my gosh that’s me. It just fit so flatteringly and suddenly all the parts of my body I was negatively obsessing over looked amazing and I felt like I was a princess and that I genuinely was a beautiful girl. When I stepped out and stood in front of my mum, as soon as she opened her eyes she started crying and so did I. We then accepted we should try on some other dresses - just to check. I tried on so many beautiful dresses. Dresses with sleeves, dresses with illusion backs, fit and flare, off the shoulder. You name it, I tried it. I even tried on the Ronald Joyce Nora dress, obsessing over the flowers and the way it accentuated my figure. But my heart kept pulling me back to Caelyn. After having tried on all the 18 dresses I jumped back into the Caelyn and swept around the room like a princess. My mum made me put my own clothes back on and leave, but after 2 hours I messaged KJ and asked if I could come back next week to try on Caelyn, Nora and another off the shoulder dress with my bridesmaid. The other dresses were really just a cover for the Caelyn. I dreamt about the dress and that very next week I said I yes to the dress. It was cemented that it was the dress for me when my bridesmaid Emma, who notoriously never cries, started to cry when she saw it.