Greg and I were both RAF reservists serving on separate university units. We both went to Holland to complete the Nijmegen Marches (marching 100 miles in 4 days – I still question why I volunteered to do such a thing!) sent from our respective squadrons, in July 2014.

All the reserve teams shared transport over to Holland and we met in the shared camp. I suffered a lot more than Greg did with the marching, and I had both my legs bandaged from ankle to hip in compression bands when we met. Never felt more ridiculous in my life! After a brief hello at the camp we didn’t speak much while in Holland (perhaps something to do with the bandages!) but we got chatting shortly after we all got back and ended up striking up a friendship from there – and remained just friends for a year or so.

I found out shortly after this that I was going to move to America for a year in the July of 2015 so I was adamant that I wasn’t going to date anyone when I was moving so far away. But Greg won me over and we went on a couple of dates prior to me leaving and 2 months after I moved he flew out to the US to visit me. 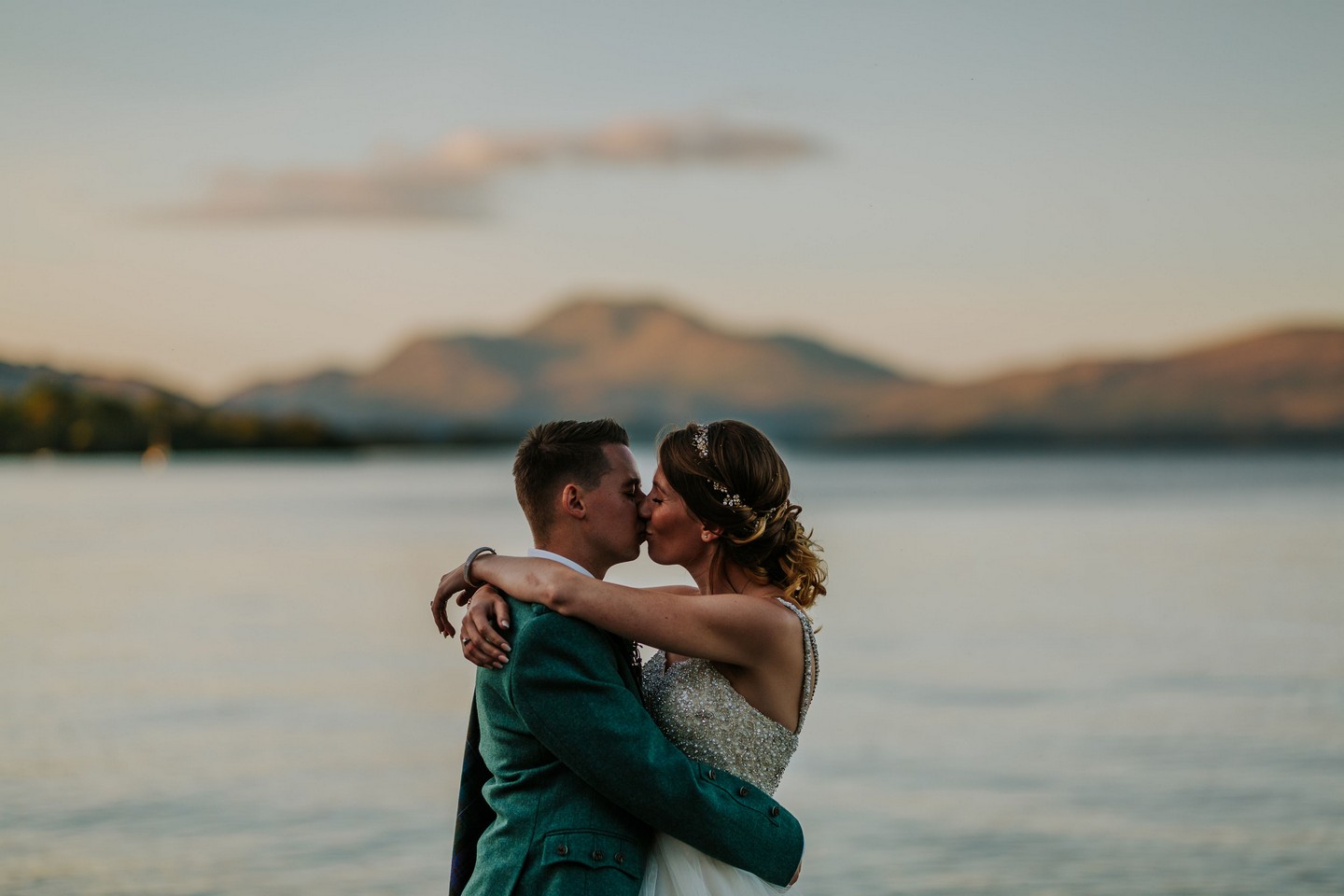 That’s so lovely! How did the proposal happen?

Greg proposed right on the pier at the Cruin, where we got married.

We had planned on going for a walk down at Loch Lomond during a trip visiting Greg’s parents, specifically at ‘The Cruin’. Greg had previously contacted The Cruin (unbeknown to me) to see if they had any staff available to take a picture as he proposed which they kindly agreed to and Lisa was in position next to the pier “admiring the view” when we arrived.

Needless to say, I was pretty shocked to see him on one knee with a ring. I of course said yes! The funny thing is, he never did get that picture he was supposed to take, but we did get a lovely photo taken by Lisa which is a great memory of the day. 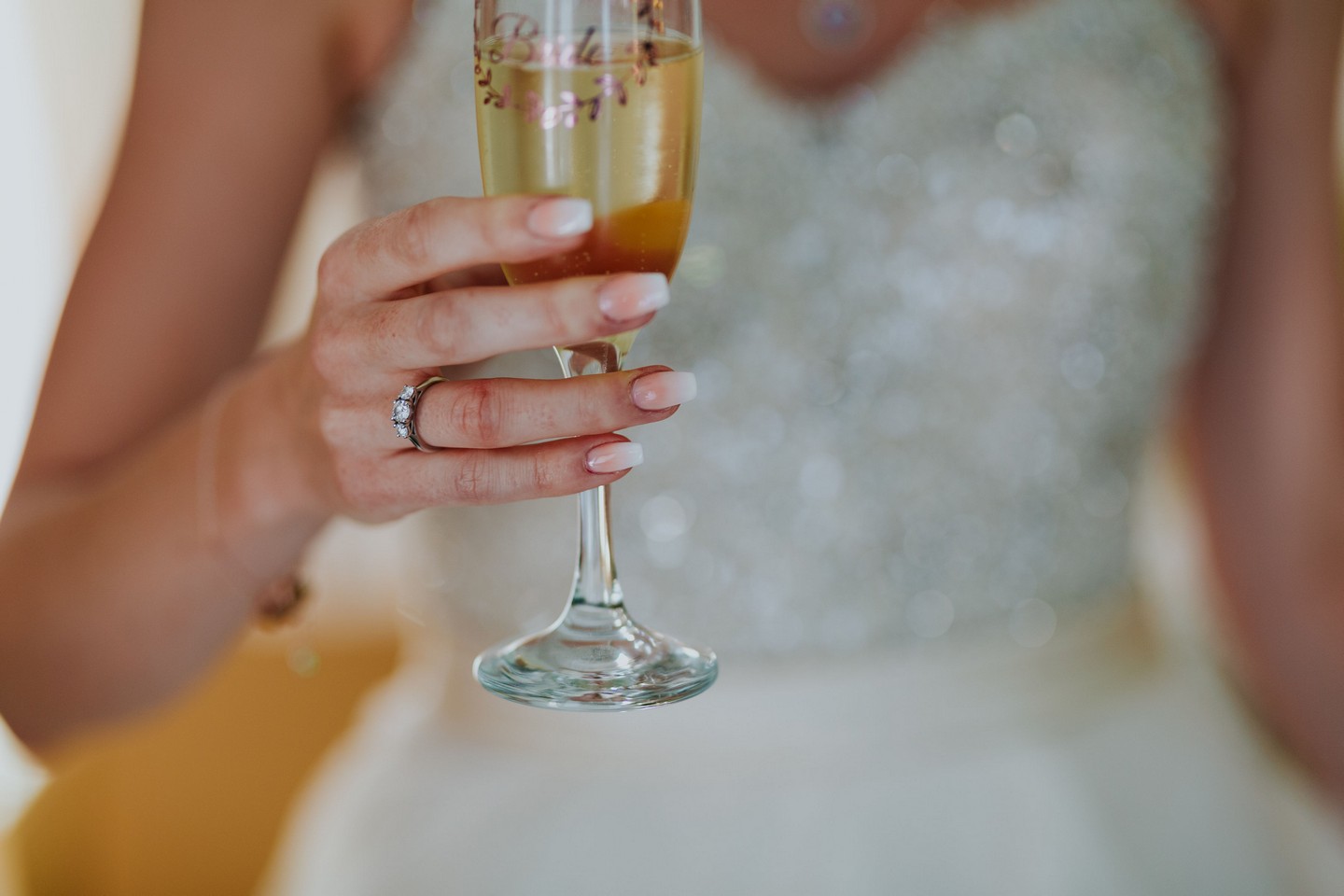 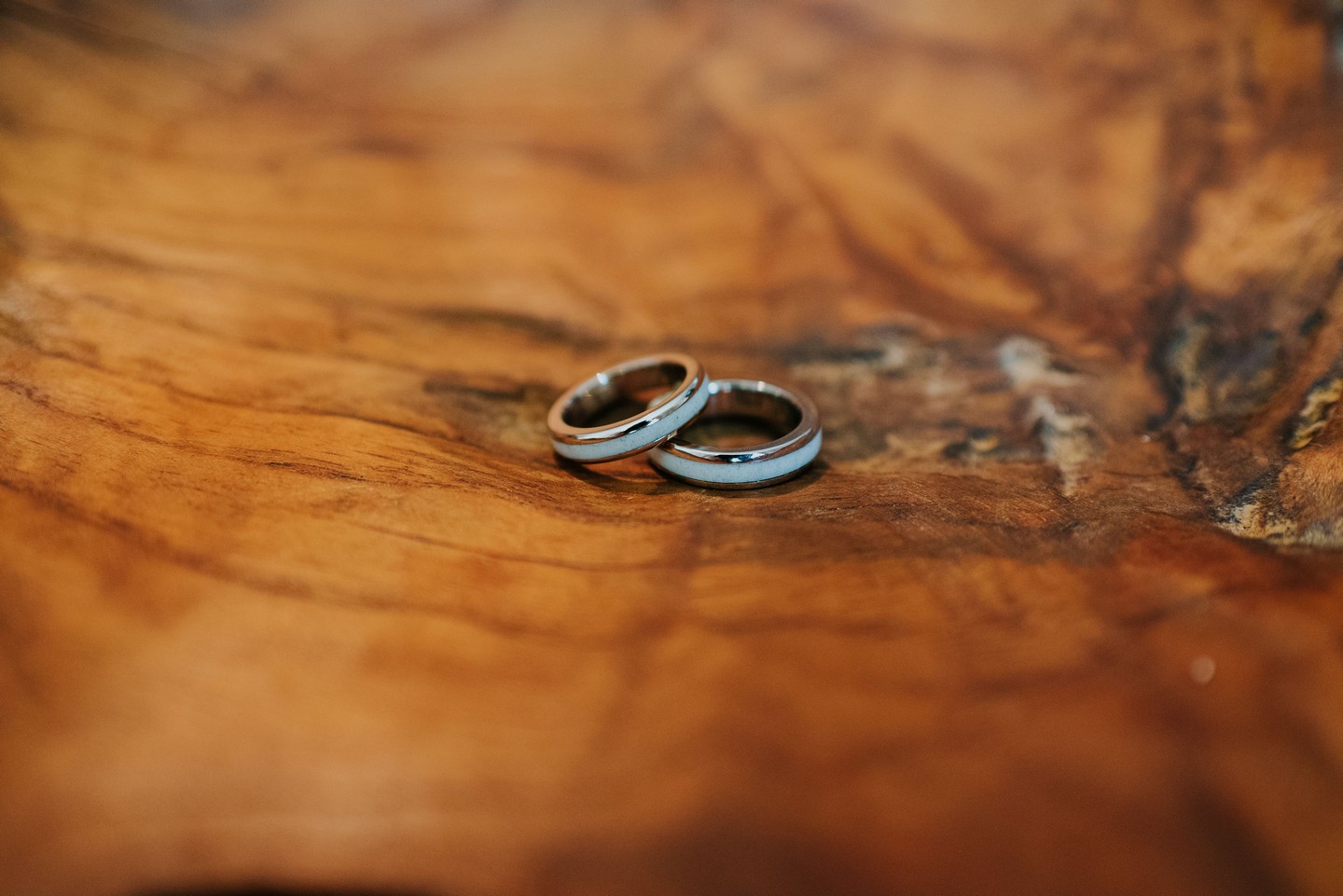 Tell us about your gown? Which boutique did you purchase it from.

I purchased my gown from Confetti and Lace in Essex. The Harriet dress is originally strapless, however we worked with the amazing seamstress, Katie, who designed custom straps for me and added them to the dress.

The dress is an A line with a tulle skirt, beaded bodice and satin waistband. It’s zippered up the back with a few buttons (I was adamant I didn’t want many of the fiddly buttons – I was worried about getting it on and off!) and it was super comfy. 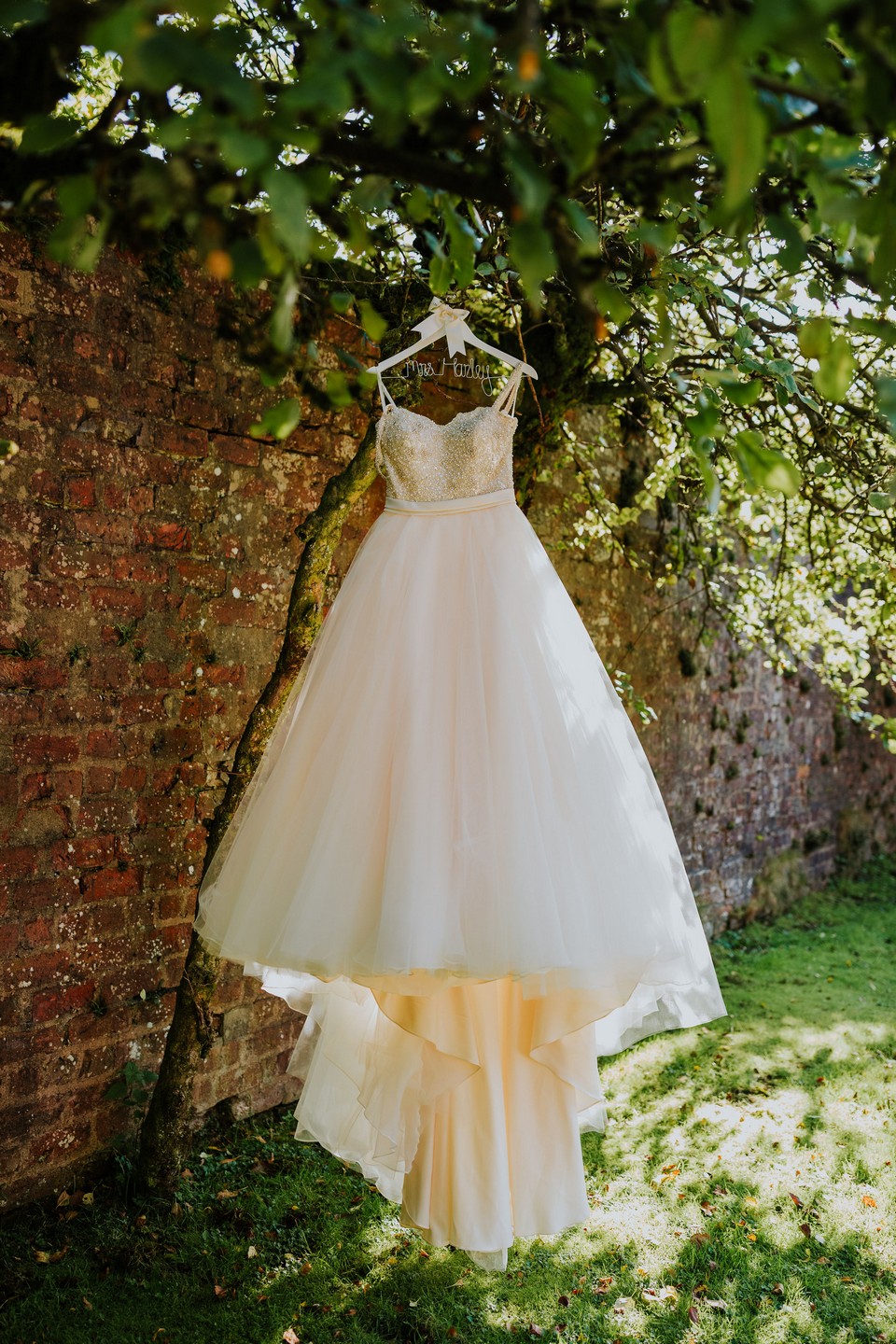 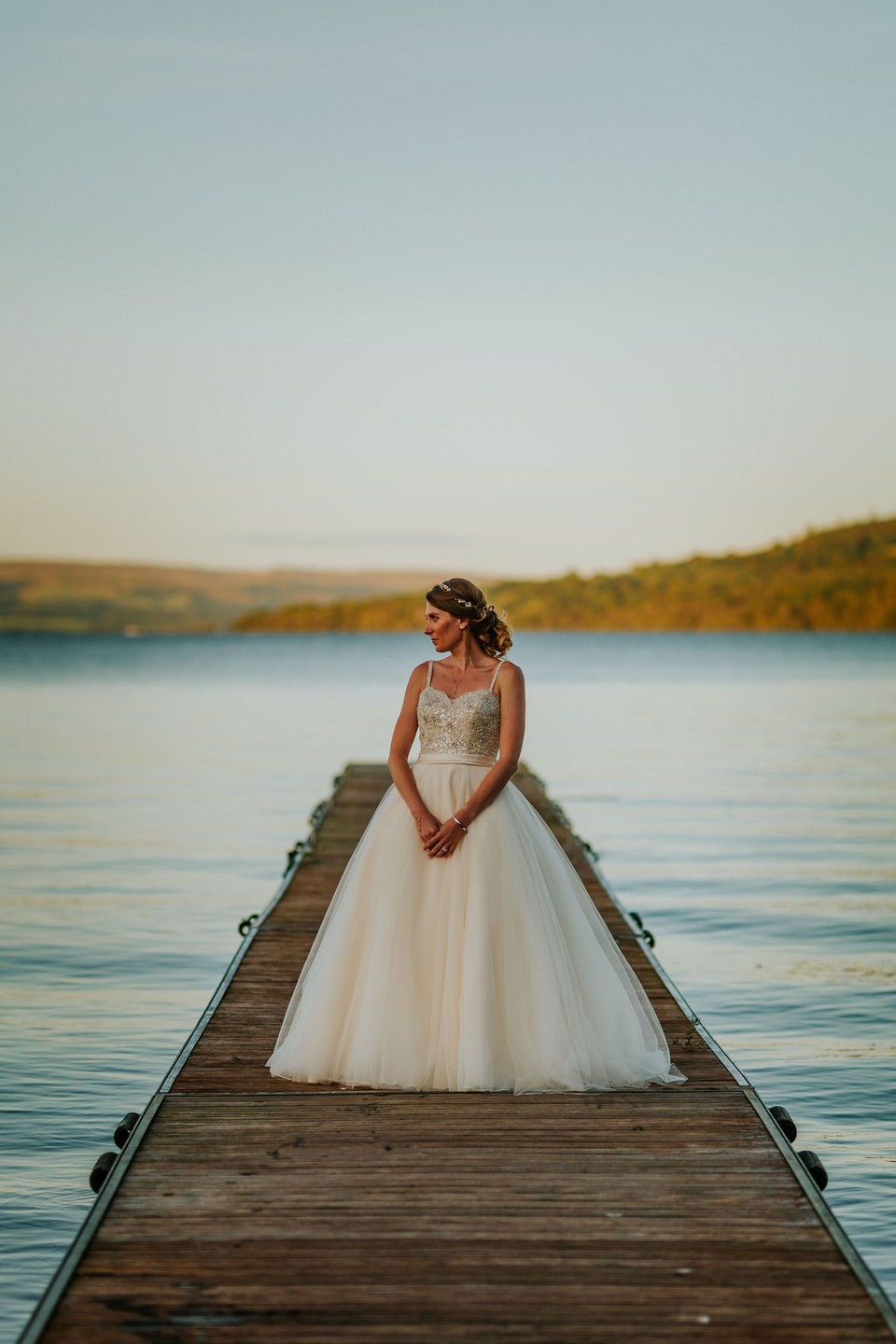 How did you know it was the one?

In all honesty we found the dress by chance! I went into the shop to try on other styles of dresses, which didn’t look great on me, and the consultants suggested I try a slightly different dress. I was so shocked when I tried it on by how much I loved it! It was a totally different feeling to the other dresses and made me feel beautiful.

By way of an entertaining story, when I went to the shop for my first fitting with Katie, I actually passed out as soon as I put the dress on. Total nightmare at the time but hilarious in hindsight! The staff at the shop said it actually happens more than you’d think which was reassuring. I guess that’s when you know it’s the one! 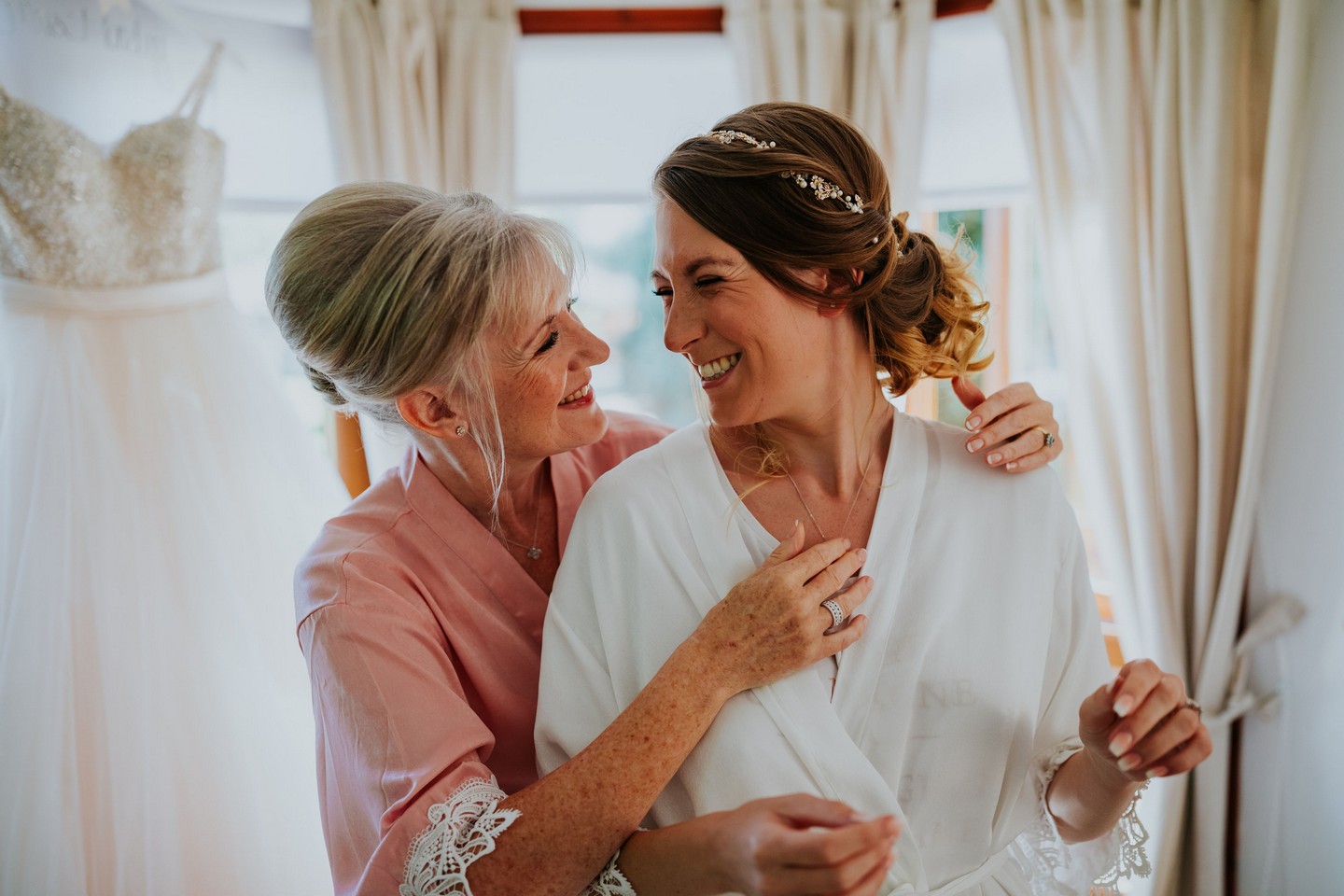 What was your wedding theme?

We didn’t really have a theme exactly. In terms of style we wanted the look to match the landscape we got married in. My dress was soft like the waters of the Loch and Greg’s kilt matched the Scottish hills and heather.

We worked to incorporate Greg’s Scottish heritage and my English heritage into the look of the wedding, with our flowers including thistles and roses. Our invites and all the wedding stationary/signage was created by a very talented friend of mine (katiefrancesart) who designed us custom artwork which featured thistles and roses and a stag and a doe.

Other than that we just wanted our wedding to reflect us as people. Our centre pieces featured our favourite whisky and gins, we had an honour guard made up of Greg’s friends from the RAF and we had a stunt plane display, as we both love flying and aviation. 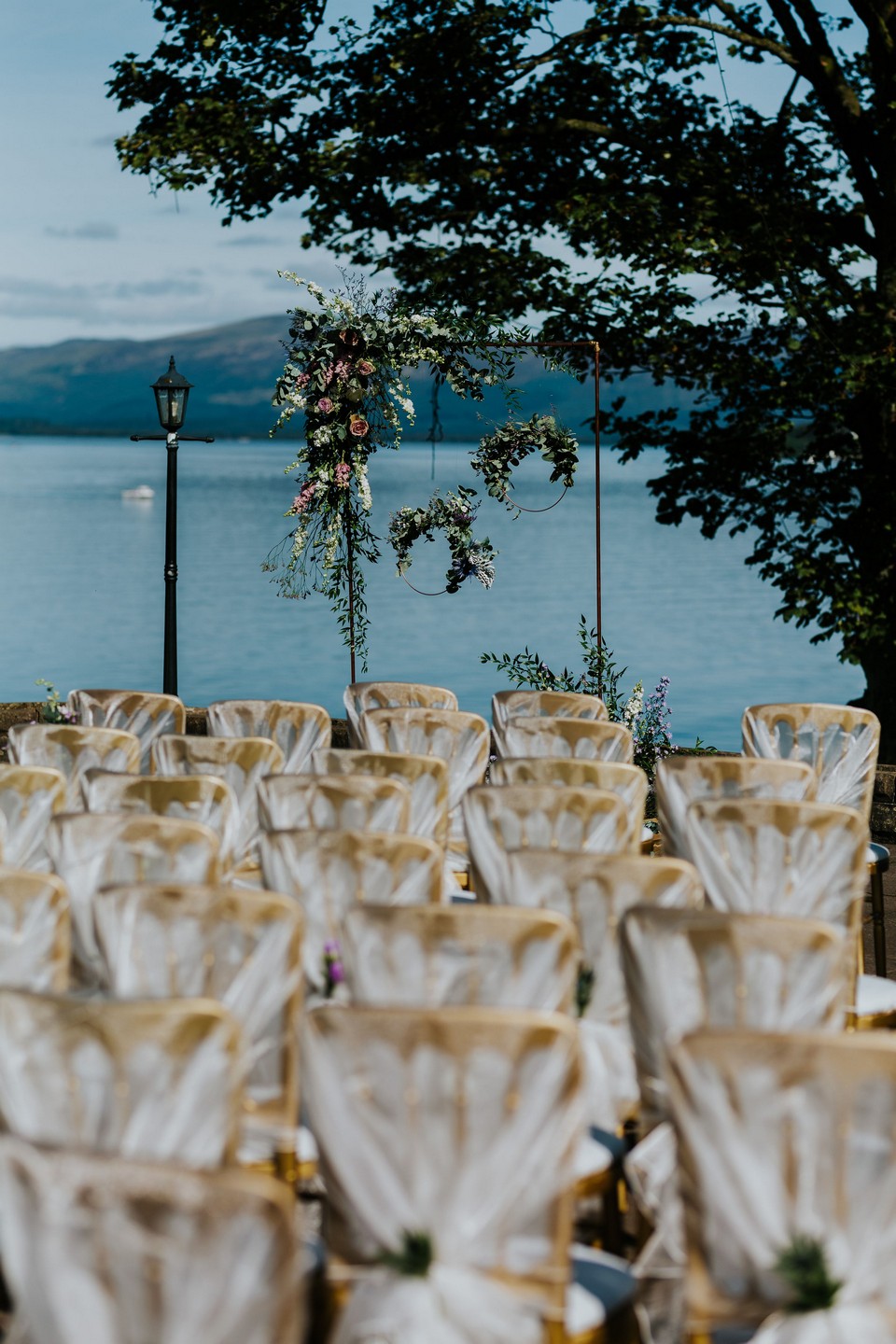 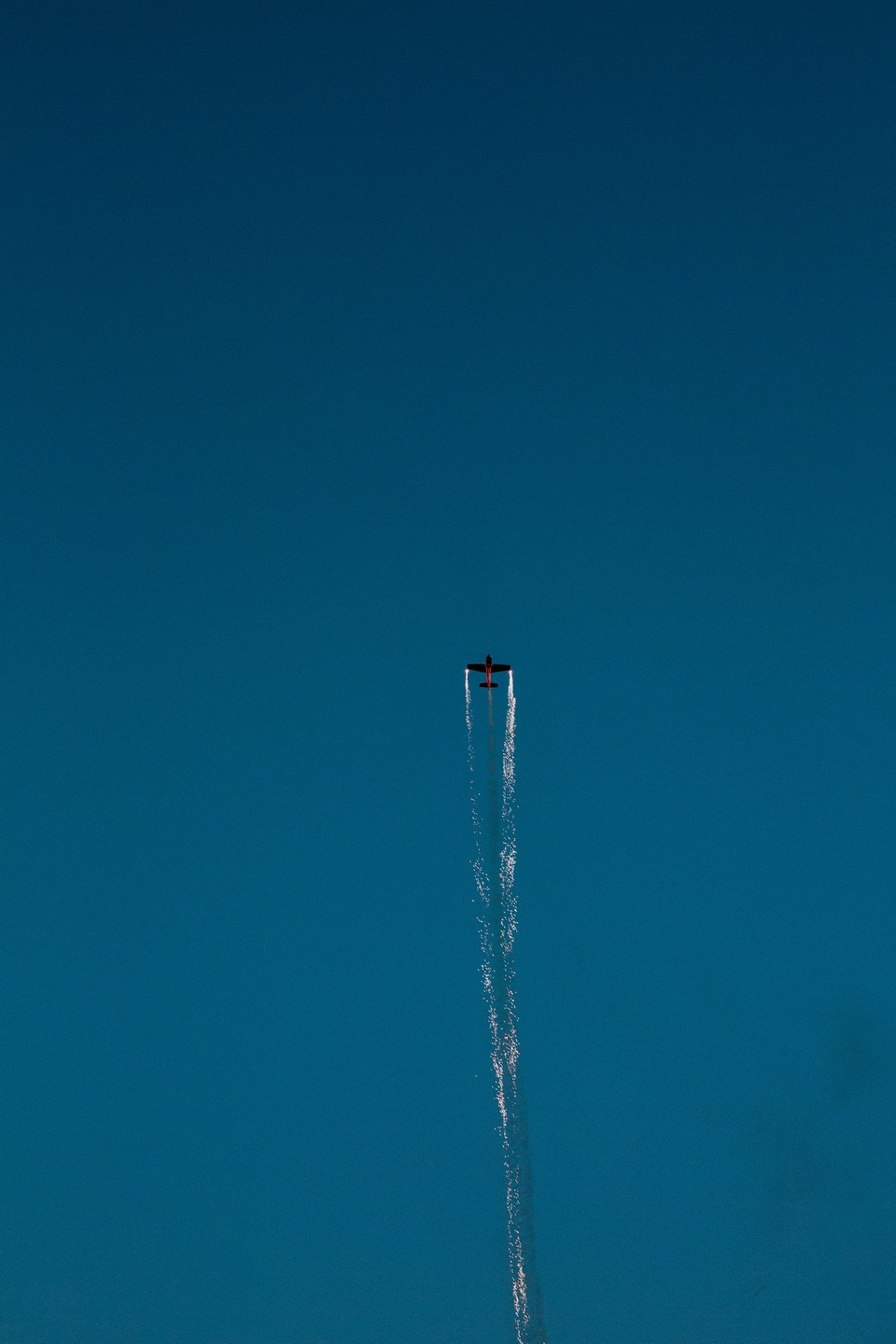 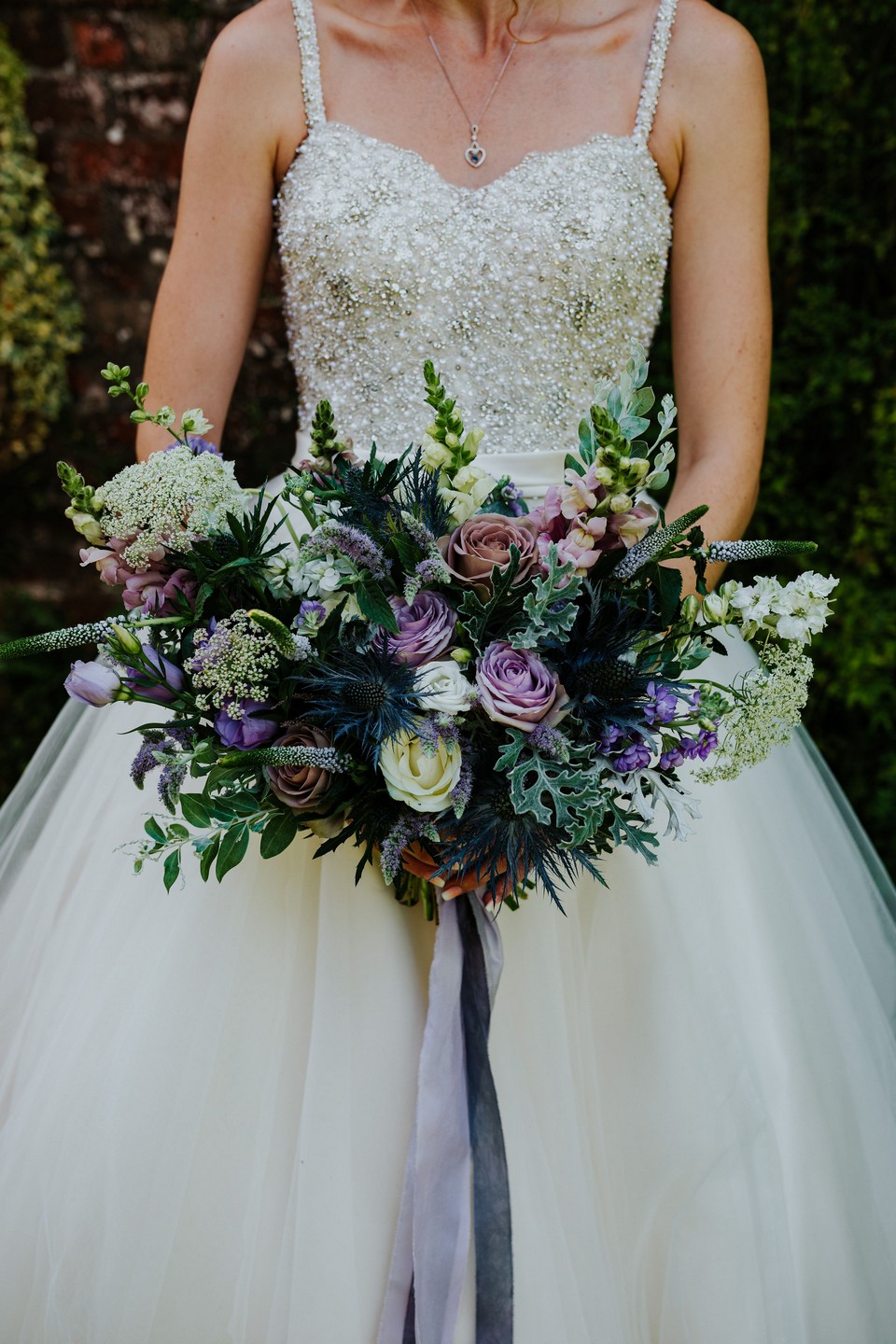 What are your three most memorable moments from the day?

For me, I think my three most memorable moments were firstly when my Dad came in to see me in the morning. He was so emotional and so happy and it was a lovely moment.

The second would be the speeches, they were so loving and funny I could listen to them all 17 times and I’d still laugh and cry every time! The final would be taking a quiet walk away to the water with my new husband while everyone was partying. We took a few moments to reflect on our day and the amazing friends and family we were surrounded by was wonderful. 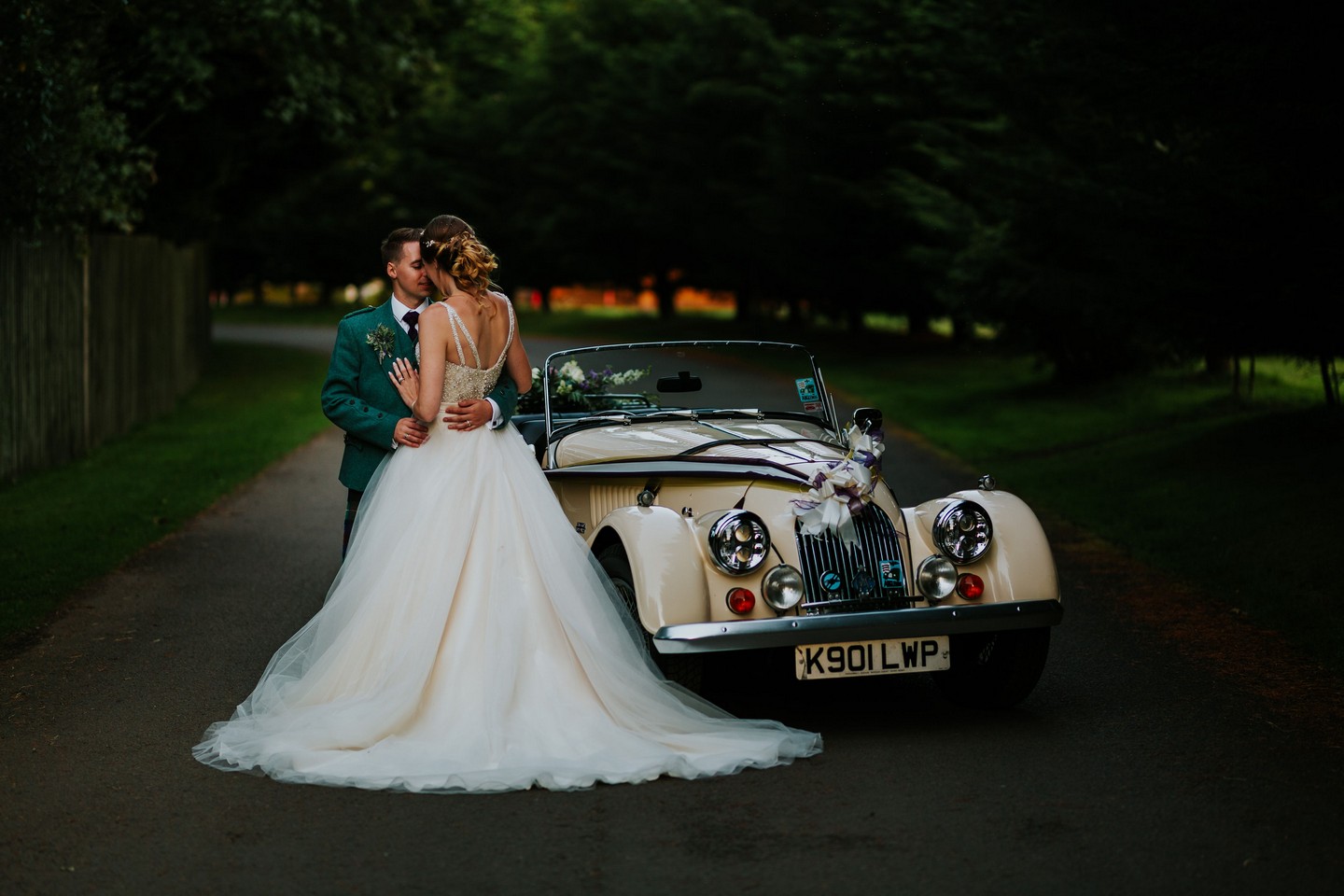 What are your top tips for brides-to-be? Anything you would do differently?

I think my number one tip would be to embrace the nerves you’ll feel. I got awfully nervous and worked up about everything being perfect. I ended up seeing a therapist prior to the wedding, which was really important for me; mental health is important and should be spoken about. But I think my major issue was that I was so worried about being worried; I felt like I was going to ruin my own day by worrying. What no one told me was that nerves are normal. Feel them! Embrace them! And none of it, literally nothing, can ruin your day.

Always talk to someone about any worries and stresses you’re having, and never feel bad about feeling that way. 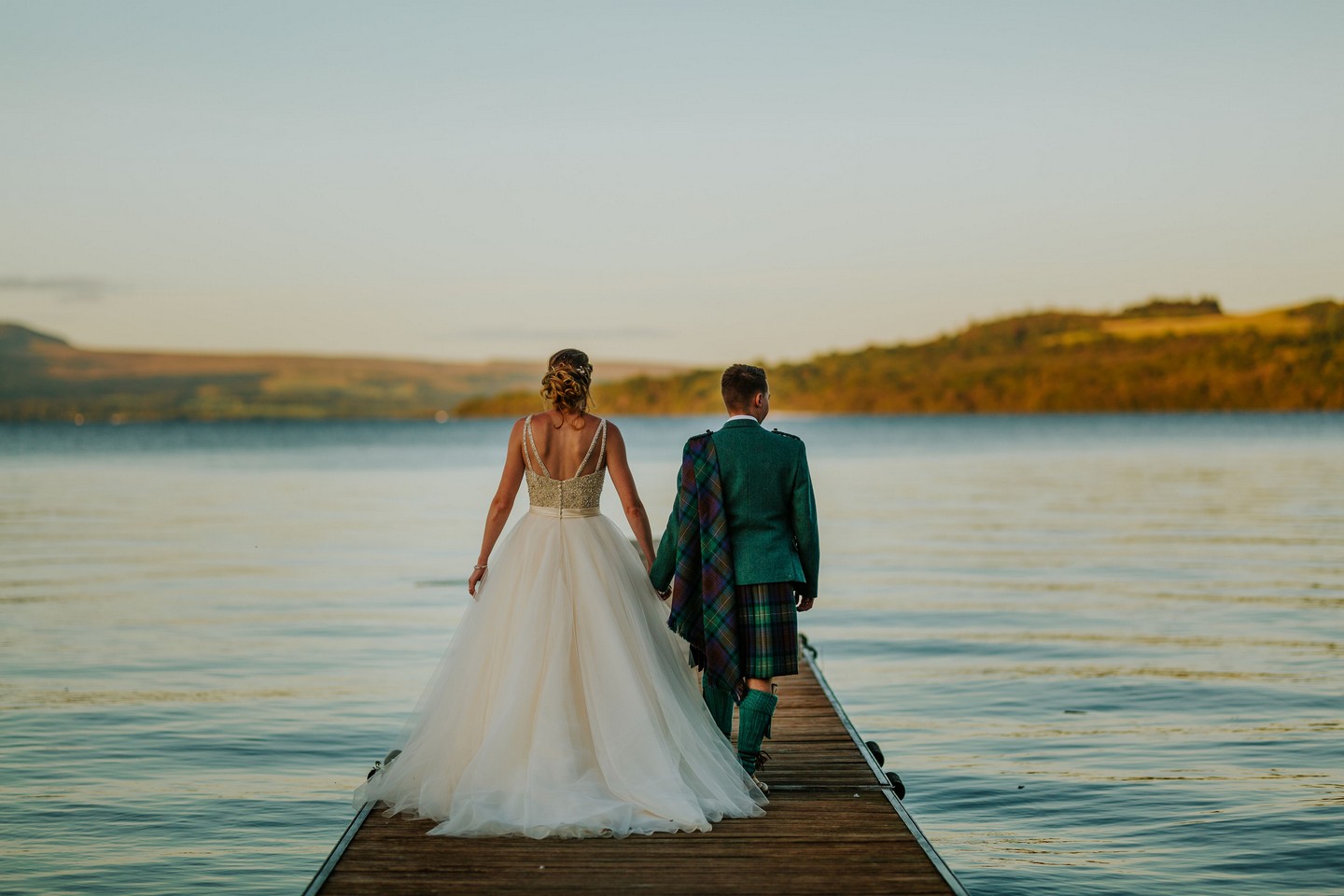