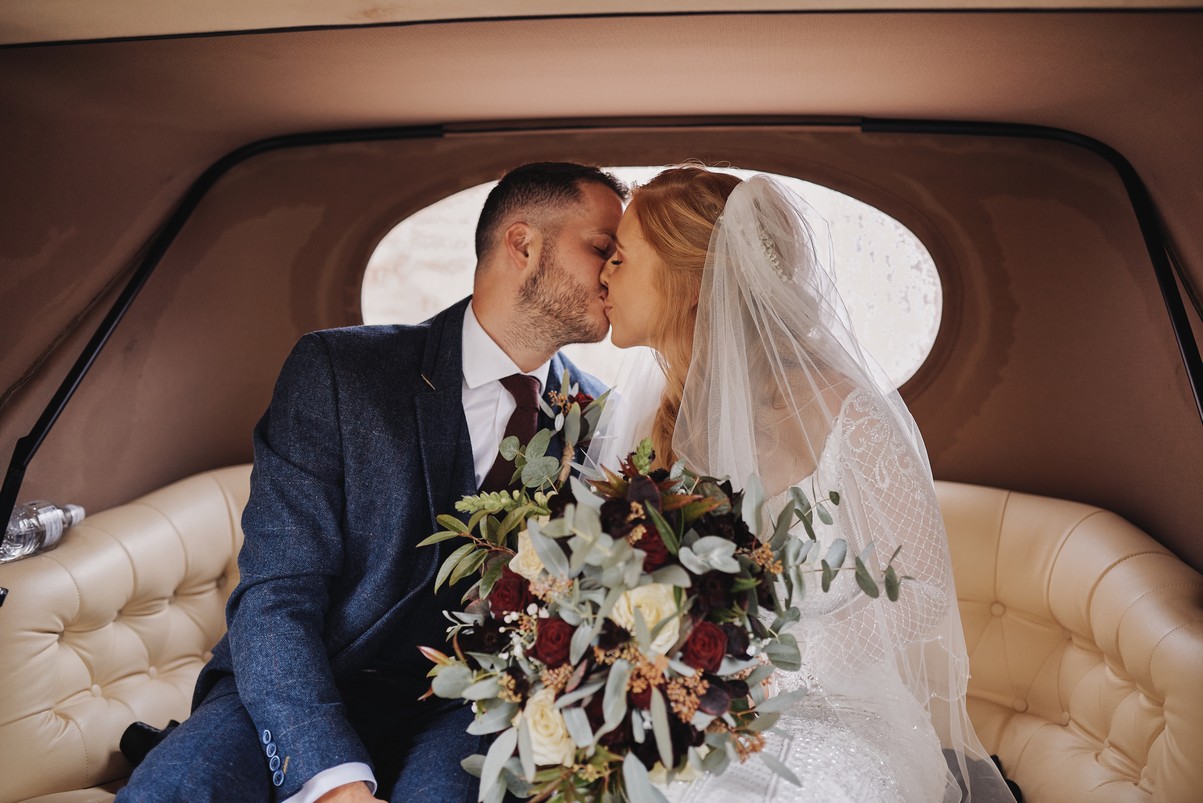 We got married Saturday 3rd October 2020. It was our original date, and we were determined to keep it! The last week leading up to the wedding was difficult and rather a rollercoaster of emotions due to the further restrictions and therefore rearranging plans again! I had joined a Facebook wedding group for planning ideas and had seen numerous people posting about their day being wonderful despite the restrictions, I found that rather hard to believe! But our day was perfect, even though it was the wettest day since 1891 (yes 1891!) and the car broke down as we were about to leave for the venue! It was so lovely, relaxed, and intimate! Of course, it would be great to be able to fit a few more people in, we narrowed down from 120, so it was not easy, but it was the most incredible day! 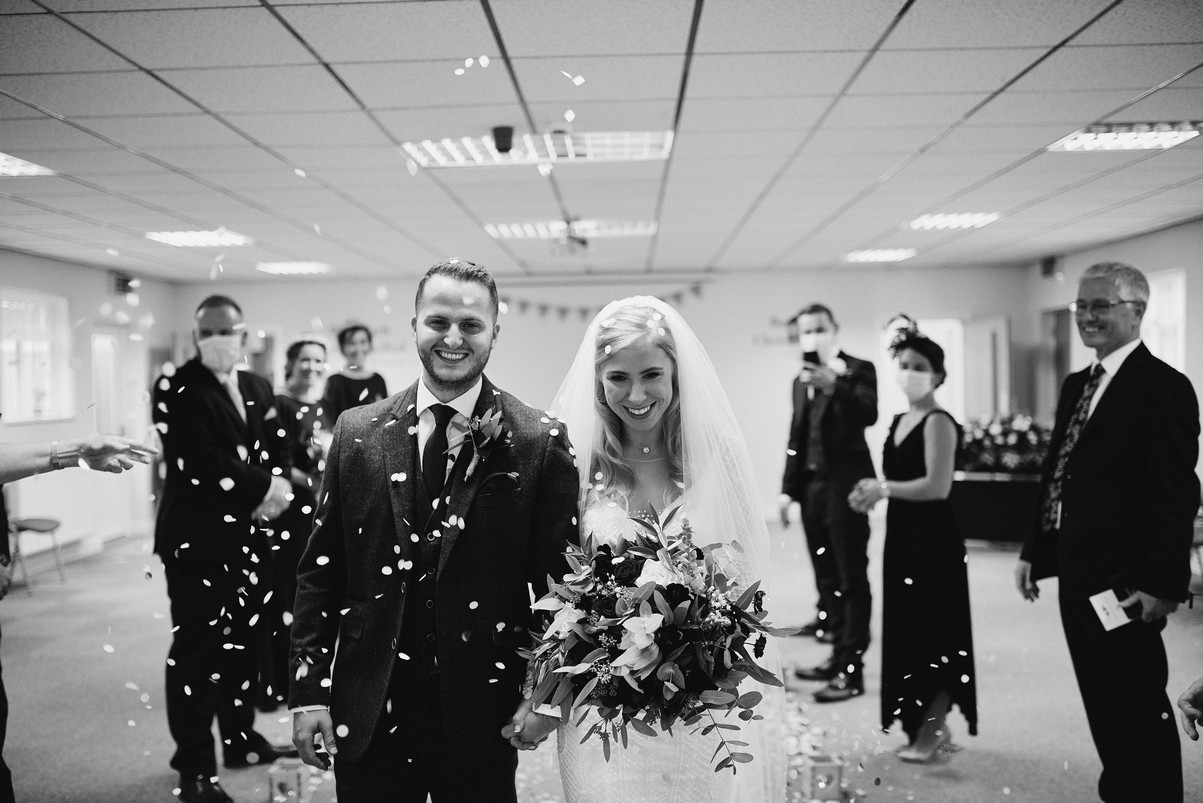 We had a rather bumpy start! We knew each other for years through family, it was tried and failed. I was stubbornly intent that he was not the ‘one’ and distinctly remember wishing him well in his future endeavours. However, after many years of us both doing some growing up and a lot of persistency from his side, we finally got together. We got engaged the same year, it was something I knew would be coming, but did not quite expect it so soon. He took me on a trip to Bolton Abbey (we are big fans of walking and National Parks), we had breakfast in this lovely little tearoom and then went for a walk. To my surprise, he then proposed to me by the river. Afterwards he treated me to an afternoon tea and then we spent the afternoon in a spa. I was treated like a queen! 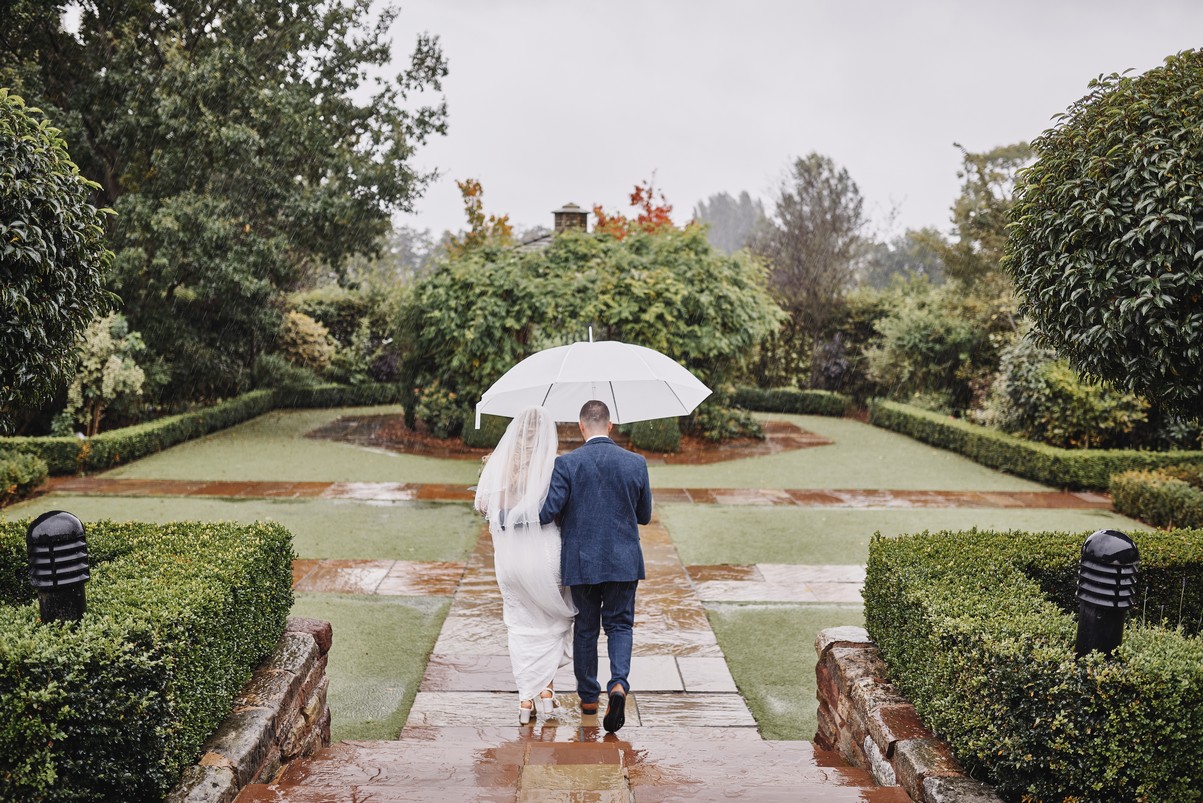 As for the wedding dress I had a few appointments booked, but only visited the first one I had booked. My friend had recently got married and bought her dress from a closing down sale, so as I had no idea what kind of dress I was looking for and I decided to go there to explore my options. I tried on about 8 dresses, one which would later be my wedding dress. However, I felt the neckline was a little low for me and was told it could not be altered. Out of all the different styles/designs of dresses I tried on I knew this was my favourite. I asked the name of the designer so I could go and research if any similar ones with a higher neckline had been designed. I was told it was by Ronald Joyce. After that first shop, I went for lunch with my mum and sister and called a few shops around the area I live, to see if they stocked Ronald Joyce. Miraculously I managed to find a shop that had a free appointment on the same day. 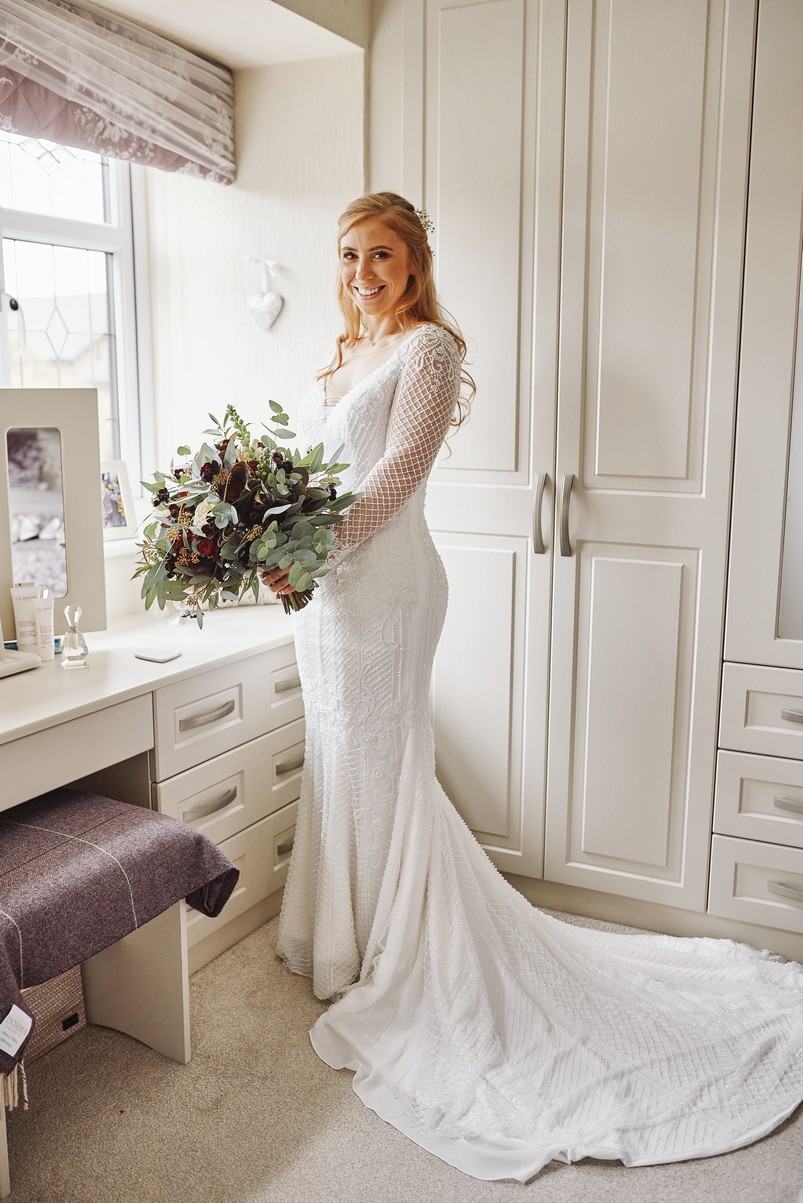 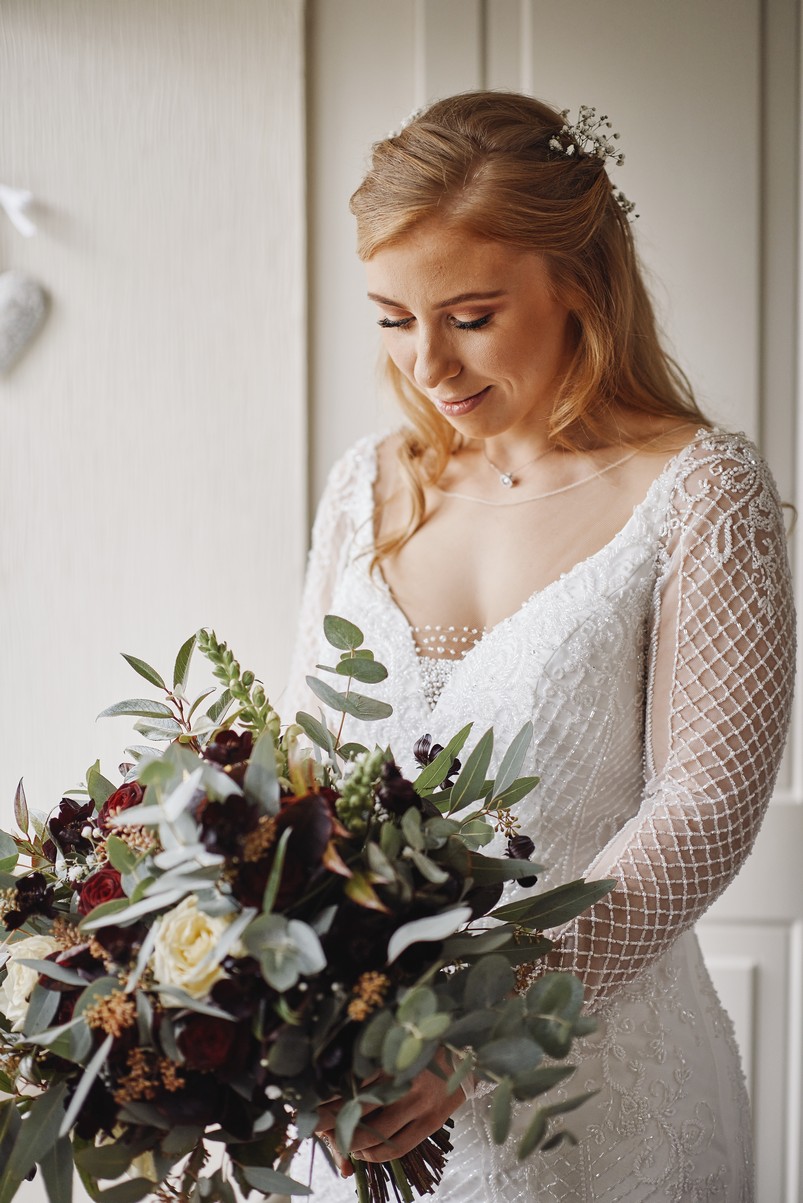 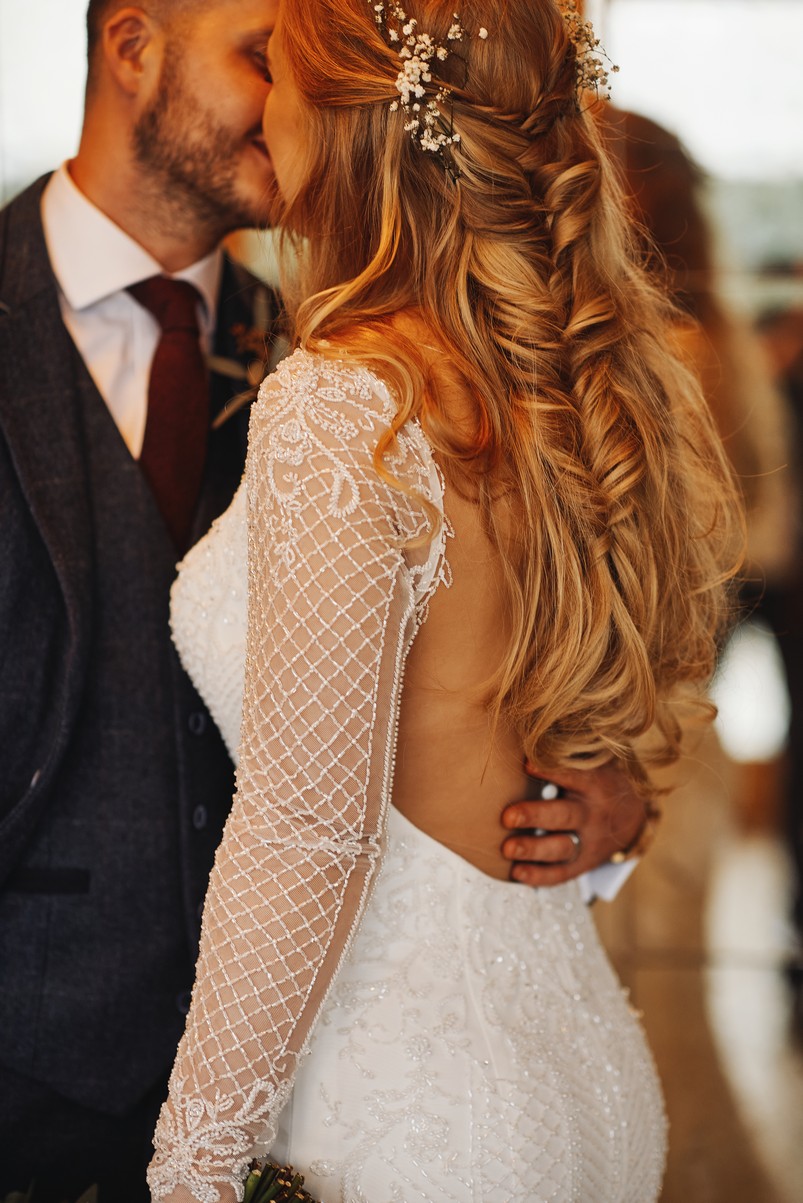 When we got to the shop (Cheshire Brides of Frodsham) I picked up several RJ gowns, including the one I had previously tried. After trying on numerous other beautiful dresses, I just did not like any of them as much on myself as the original. The phrase “it’s nice, but not as nice as the other one” was mentioned a lot. I told the ladies at the shop about my love for this dress, but not being as comfortable with the low neckline. I was overjoyed when they told me numerous ways that this could be altered. Hallelujah this was the dress! The Hatsy gown was the one which is style number 69266.

Julie and Sharon from the shop were brilliant and so helpful. As a person who was expecting the dress shopping experience to be a lot more anxiety filled and disappointing, I was pleasantly surprised. I’ve always been a fan of the vintage vibe and when I tried the Hatsy dress on I fell in love with the beading and the detail to the dress and sleeves. It has a fishtail silhouette and illusion cut out back with buttons.

I had a two tier, scalloped edge, long veil with beading around the edges to match. I’m a big fan of tradition, so I wanted to wear the veil over my face until we were pronounced man and wife. My husband to be gave me a Swarovski necklace at the end of the wedding rehearsal, the night before the wedding that tied in with my engagement ring. My sister (MOH) also bought me a lovely bracelet that tied in. 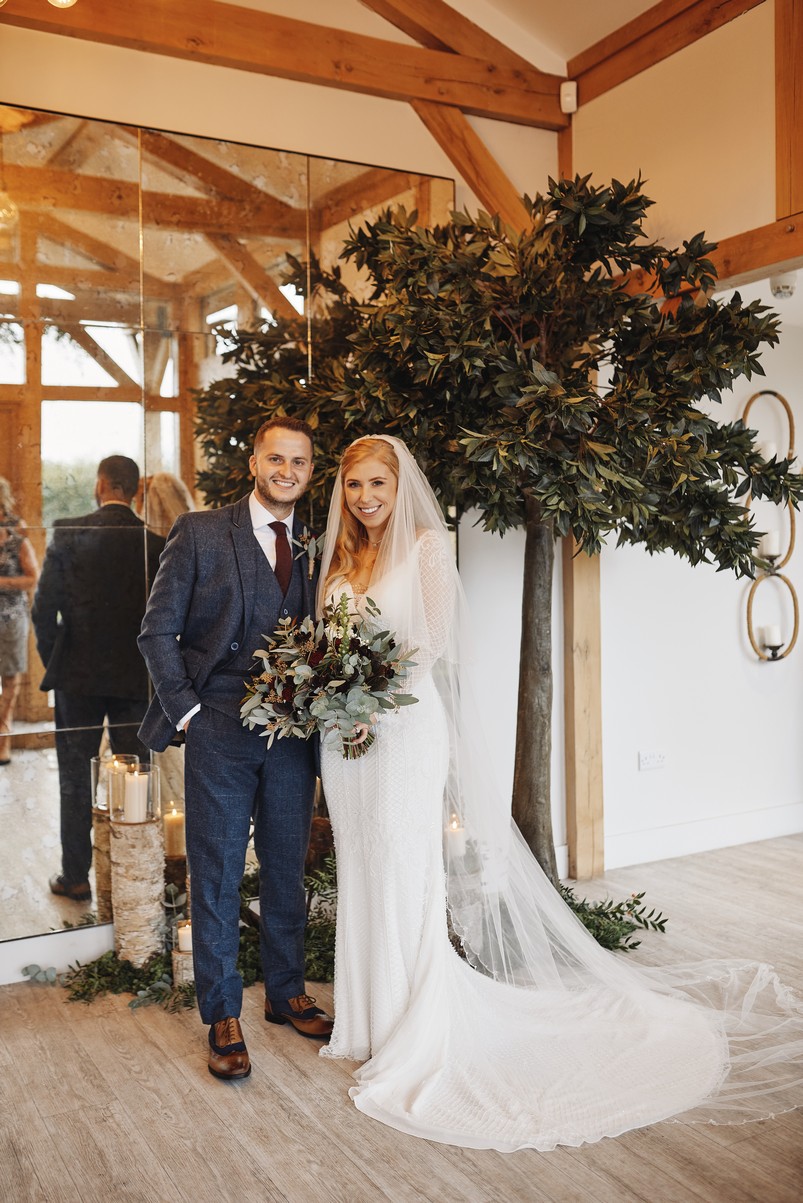 I think I shocked myself and everyone else when it came to planning, I was rather relaxed and organised (characteristics very unlike me!). Lots of decisions were made and things were booked in a very short space of time. I always told myself that I wanted to enjoy the experience of planning as I would only be doing it once, which I still did even after the pandemic started. I tried to remain positive that even though things were out of my control, there was nothing I could do about it and had faith that whatever would be, would be.

We went for a rustic, autumnal theme. Our colours were burgundy and navy. My husband used to be a carpenter, so he loves all things wood, as do I, so there was a lot of wood incorporated into our centre pieces, signs, and favours etc. As a person who does not like shelling out money, I did a lot of research on cheapest options and looked at what simple things could be done myself. Thankfully, I had some very talented members in my bridal party, so they helped a lot with the creative side of things. Also, the Facebook group ‘The Cheap Wedding Stuff Community’ is great for ideas. I wrote the section below and posted it on to the group once the wedding was over. 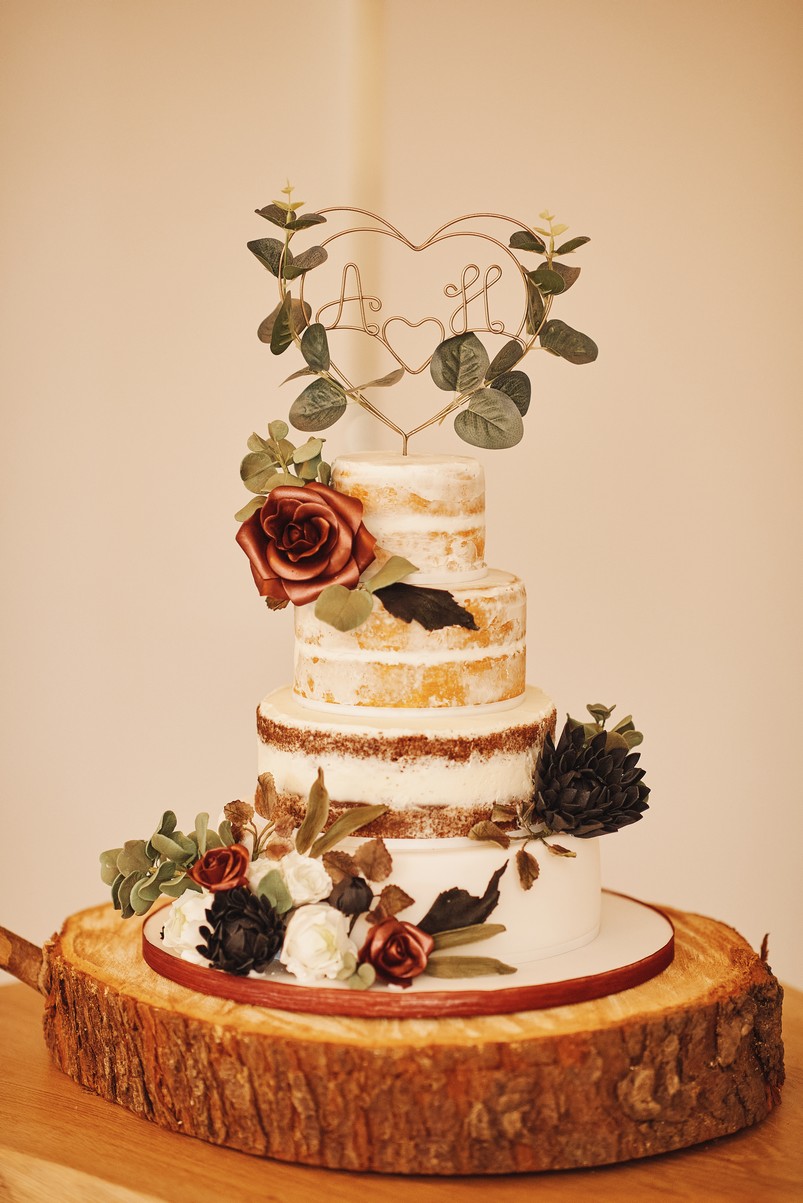 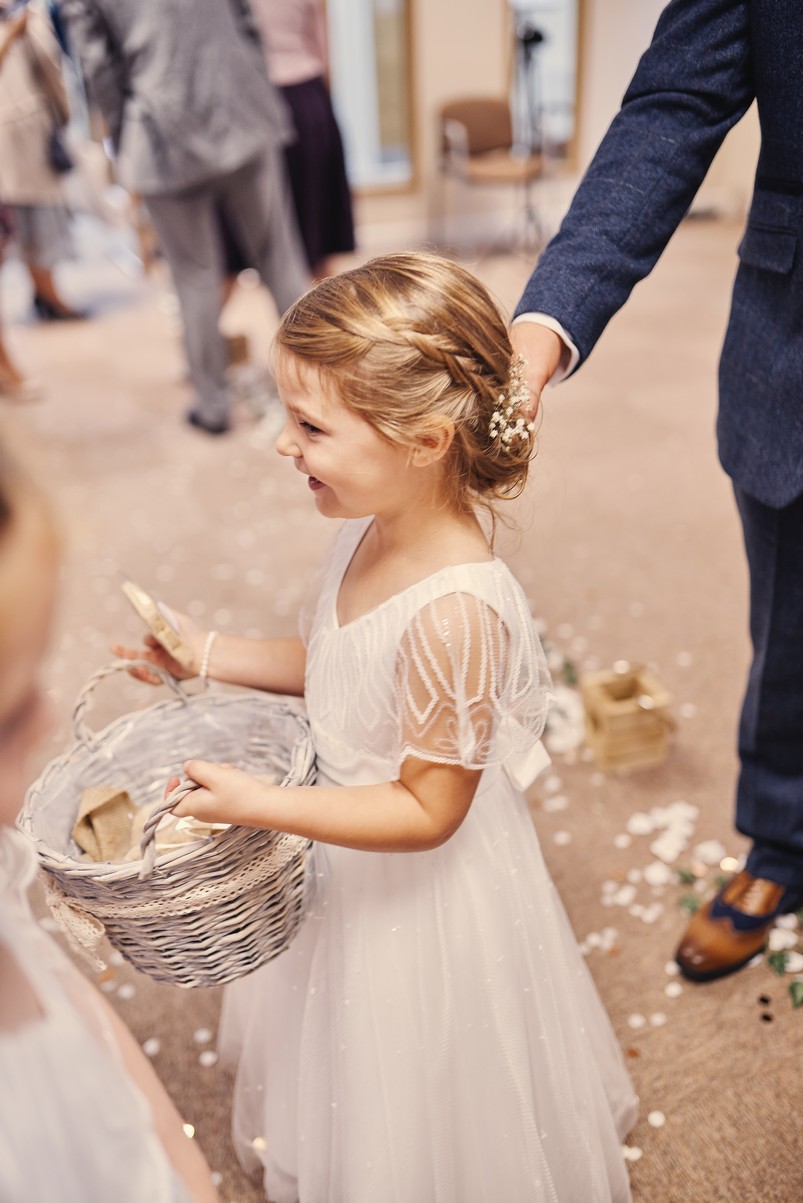 I have to say one of the best things about having a smaller number of guests was the quality time we got to spend with the people we did have with us. After the ceremony we had an afternoon tea with 15 people and then the evening reception with another 15. The food was incredible. The speeches were quite funny, and it was nice for us to all be able to laugh together, even with all the current circumstances going on. Also it rained ridiculously heavily all day and the car wouldn’t start from the church to the venue, but we rolled with the punches. 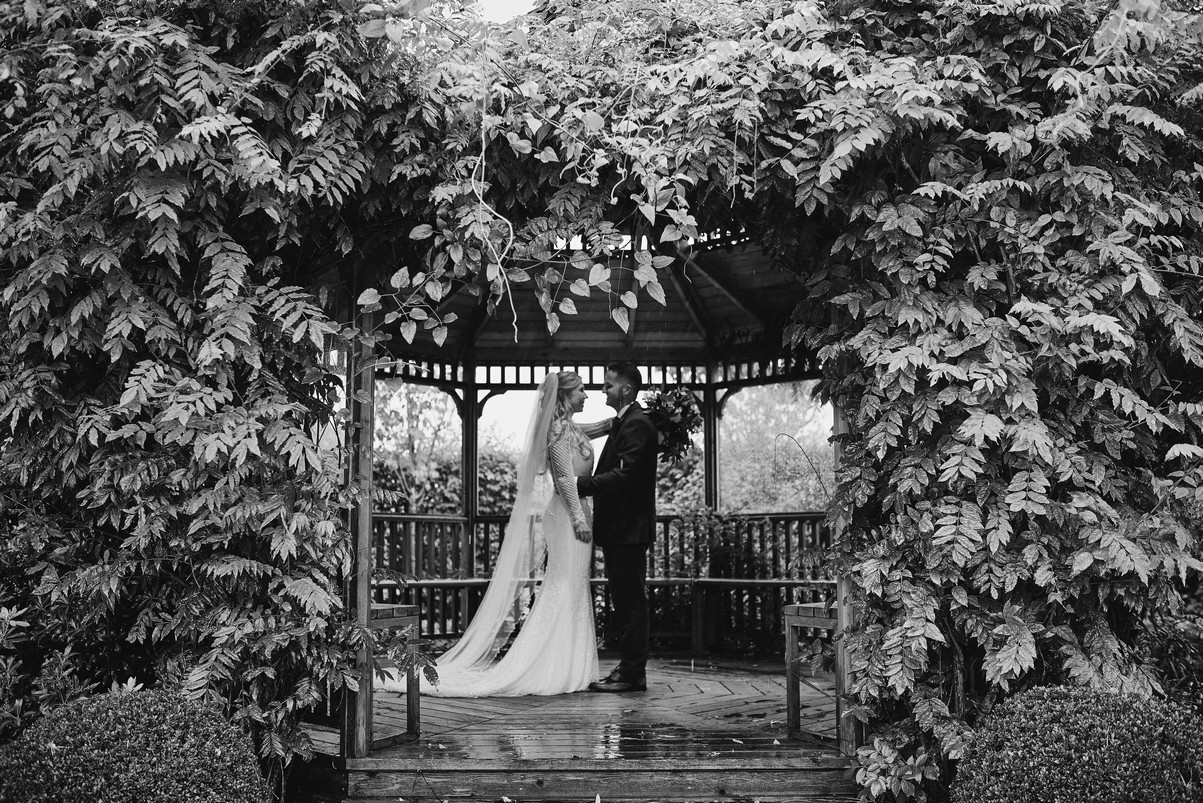 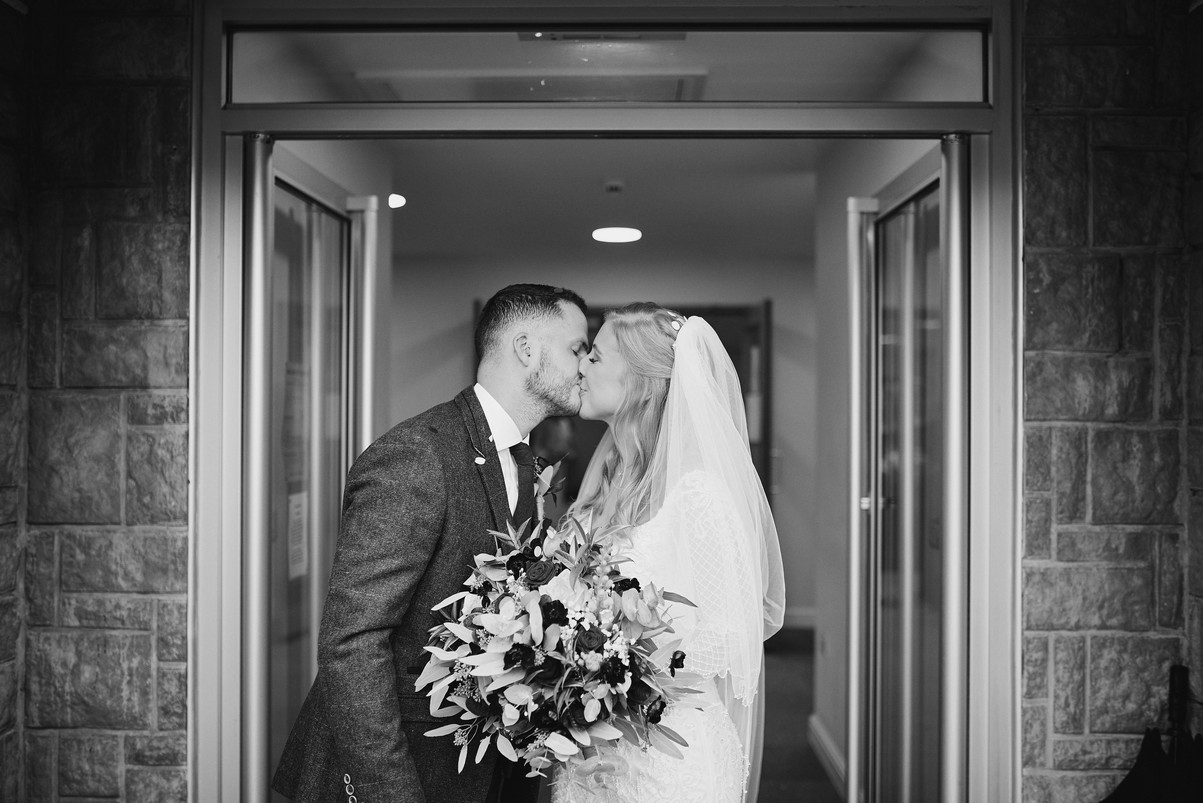 It is also worth a mention that we sent out invites for people to watch the wedding on an app called Gotomeeting, so that those who we could not have, could join us virtually. 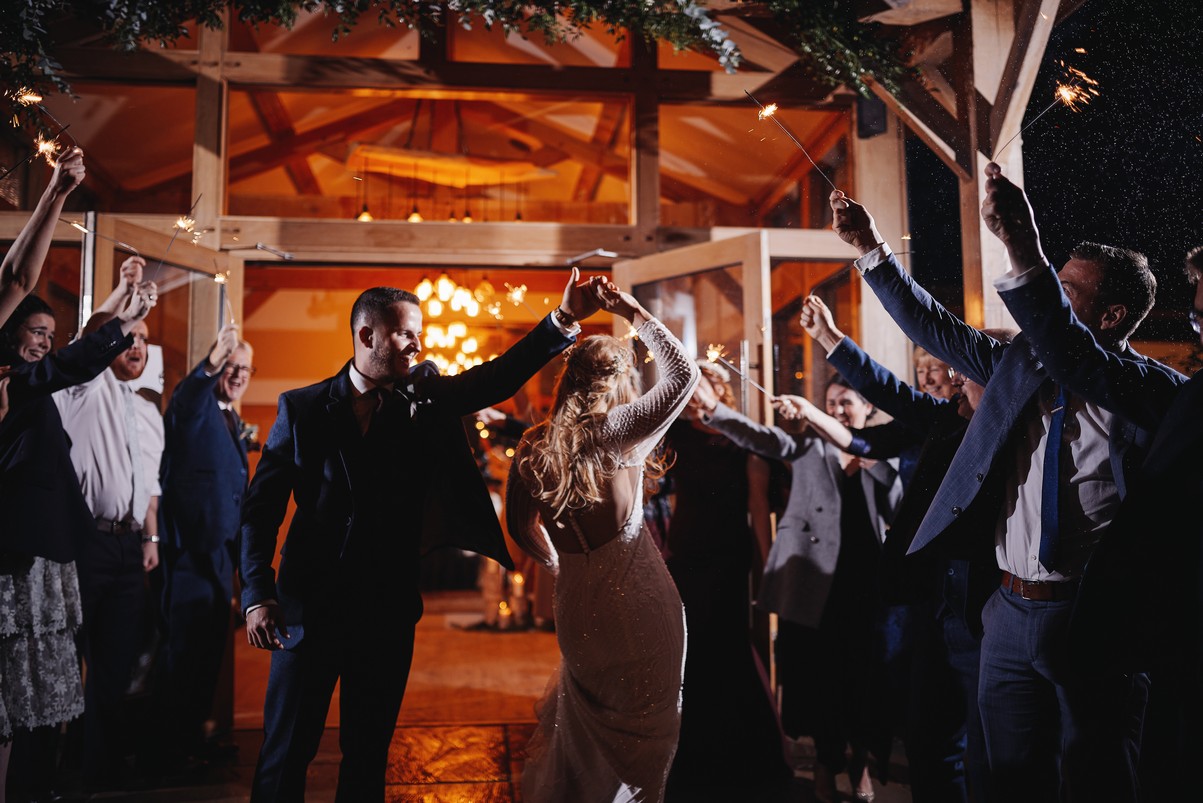