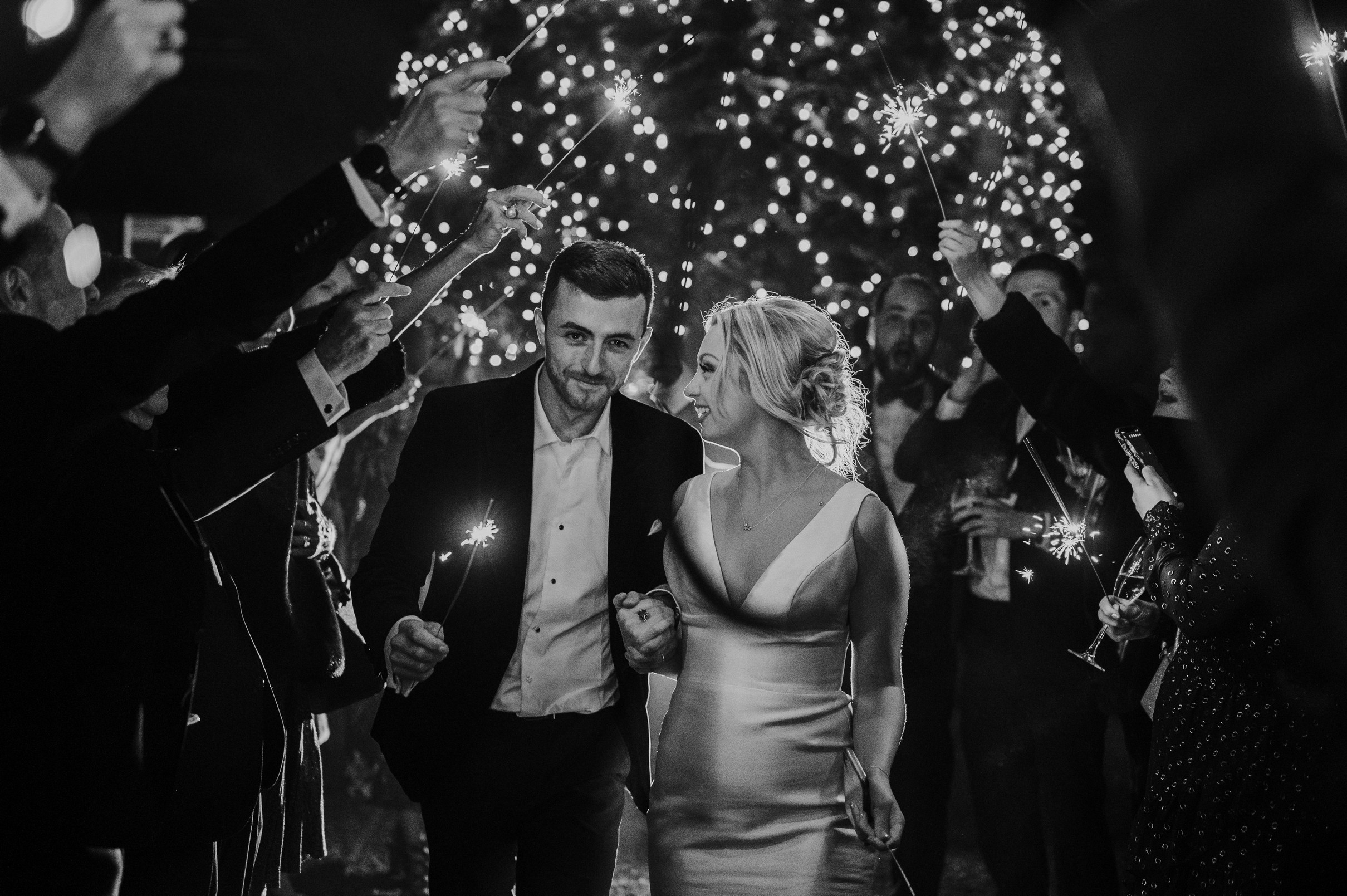 Where was the wedding?

The ceremony was at Holy Cross & St Mary’s Church in Quainton and the reception was The Dairy in Waddesdon, both of the venues where fantastic. We chose the Quainton church as it was a traditional church village church and we chose The Dairy because we wanted a venue that would be ours for the day. The Dairy was the perfect combination between a grand manor house and a Barn. The West Hall had oak beans and huge fires and the Winter Garden had a glass greenhouse feel with antiques and a water feature. Both rooms overlooked the lakes which was an amazing setting for our day.

How did you meet?

Sam and I met in a very unromantic way. We were both at a nightclub (the local barn converted one with very sticky floor and cheese music on loop). He was nervous to talk to me so ask his friend to find out if I was interested in him, which I was. We ended up talking all night and bonded over ultra-marathons of all topics! My dad had completed a few extreme races that Sam was interested in. That evening Sam texted me saying ‘I hope you got home safe! P.S. your dad is my hero’. We have not let him live that down. 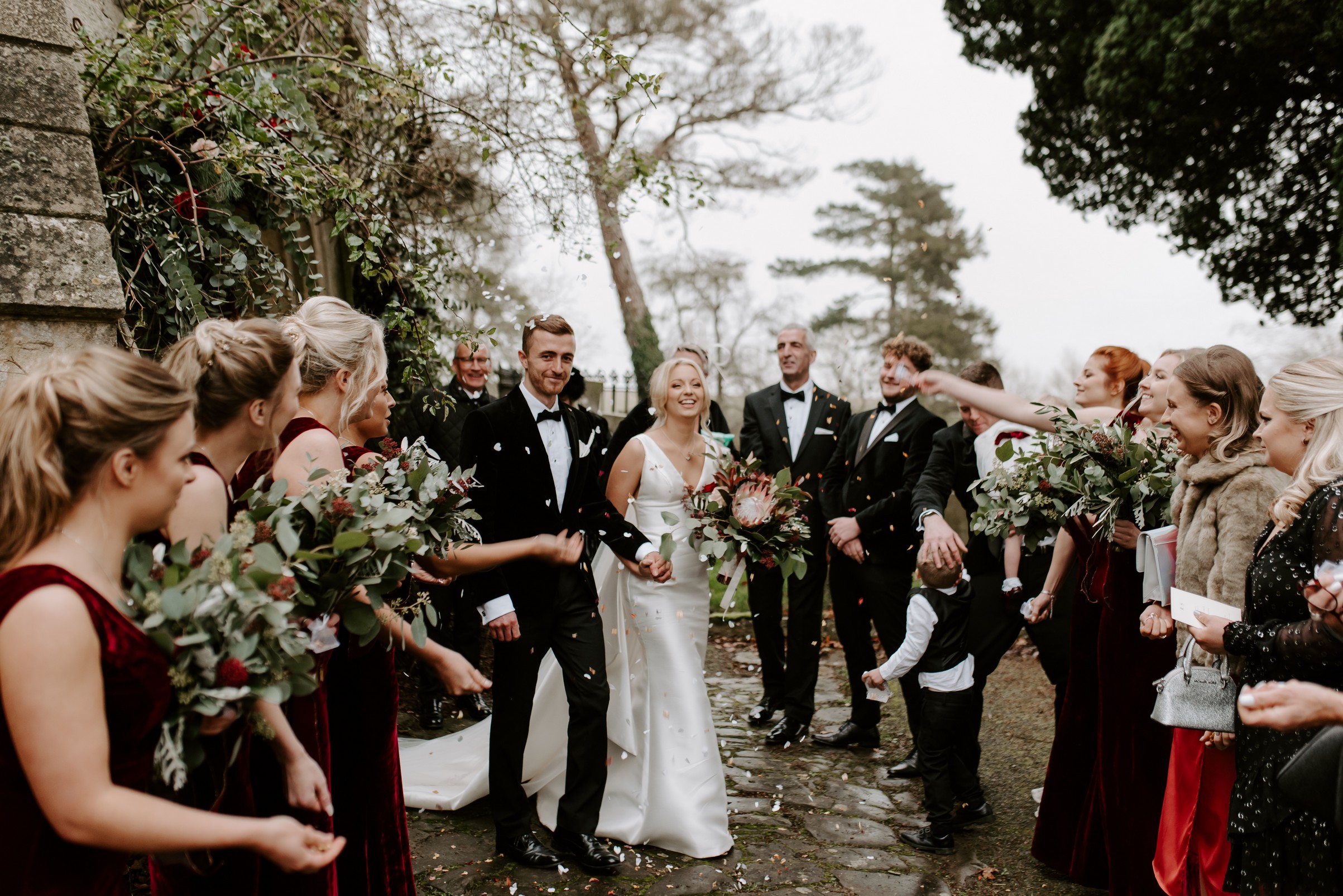 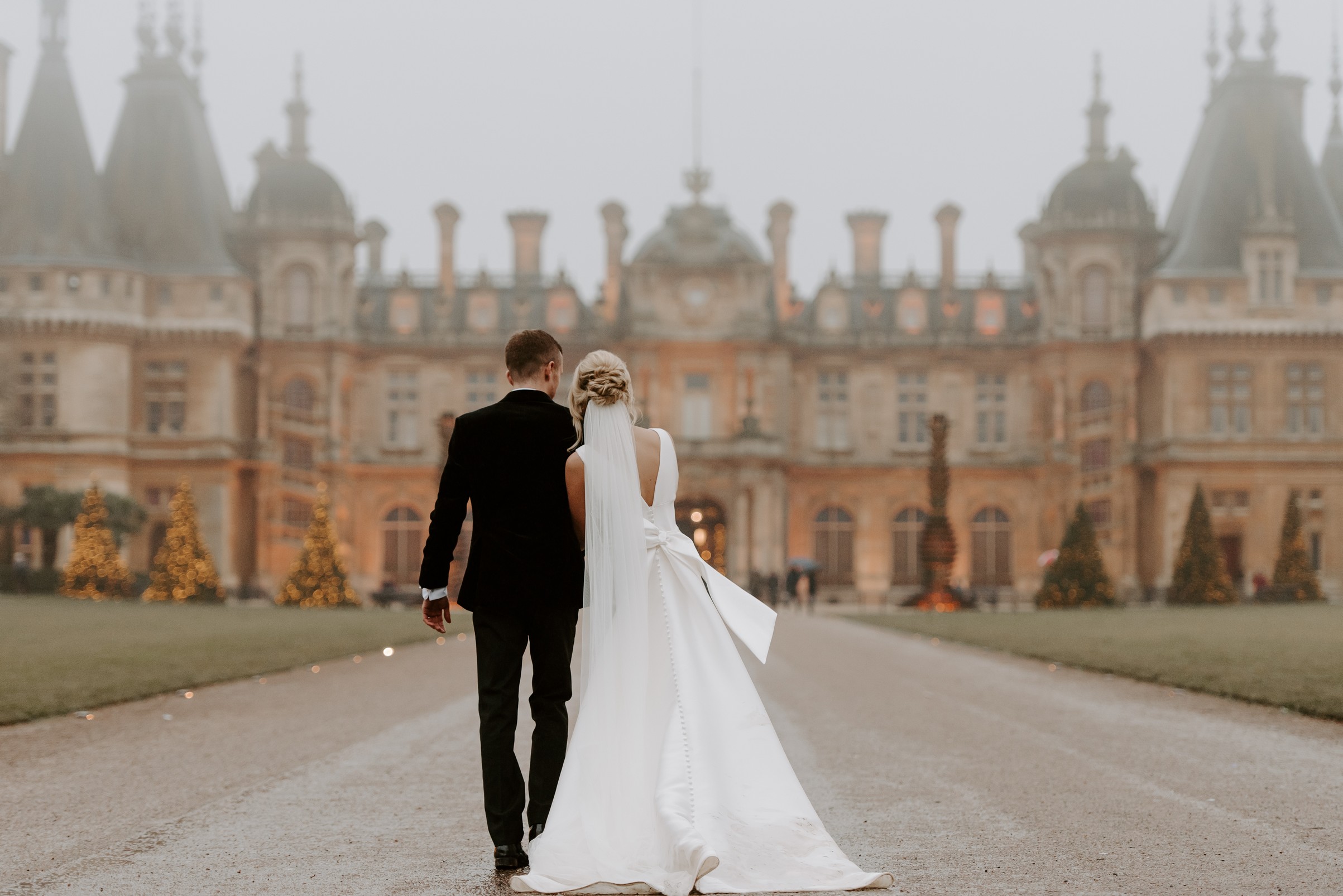 Aww! How he propose?

He proposed to me in Annecy, France. We had been together for nearly 5 years and living together for a year. It was the day we arrived and we had gone out for dinner, He ate nothing and I had a full 3 course meal (no shame). We then went for a walk after dinner and as we go close to the lake he said ‘I’ve got an important question to ask you.’ And then got down on one knee and asked me to marry him. It was probably the most nervous and excited I have ever been.

So tell us about the dress! Did you try on many dresses?

I tried on over 50 dresses and I even bought one! I would find the dress I wanted to try on online and then had to locate a shop with it. There were so many ‘the ones’ but then there was ‘the next one’. I found it so difficult to choose one because there was always something I would change or I preferred someone about a different one. I found that there weren’t many slim fitting/fish tail dresses that had a v-neck and weren’t crepe. I would hate to work out the amount of miles I travelled to try on all of the dresses. I eventually chose the Nancy by Ronald Joyce (style 69306). I went to try on a dress I had my eye on and found a few others at a shop in Southampton that I wanted to compare it too. Whilst I was there I also chose to try on the Nancy dress but did not expect to love it. I was so wrong. It fit perfectly and was so flattering. I loves the v-neck, the material and the fact that it had the additional skirt, which gave the 2 dress feel.

It was so different from a lot of the dresses I had tried on and I loved how simple it was. I remember a mother of another bride in the shop say ‘your eyes are just sparkling!’. 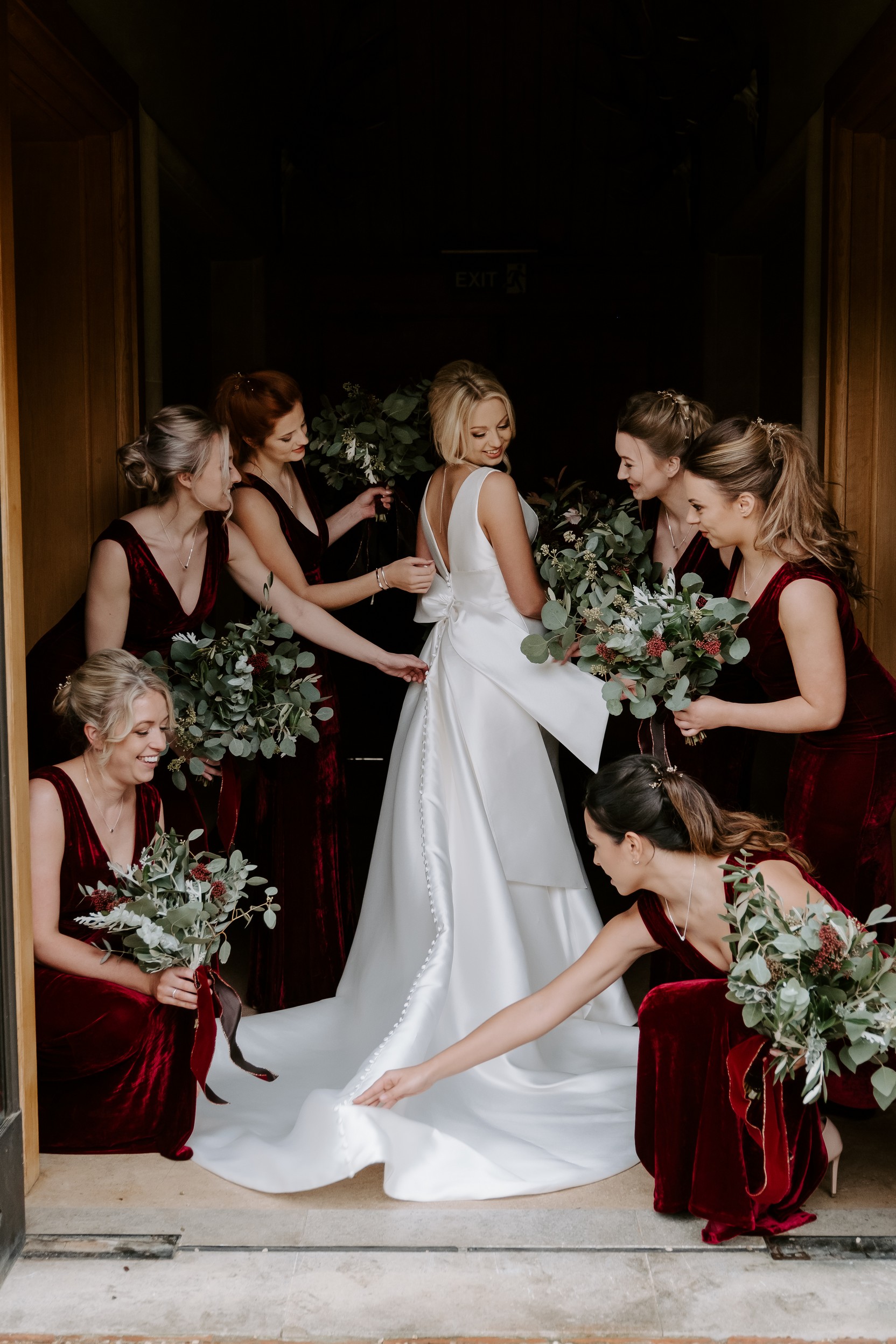 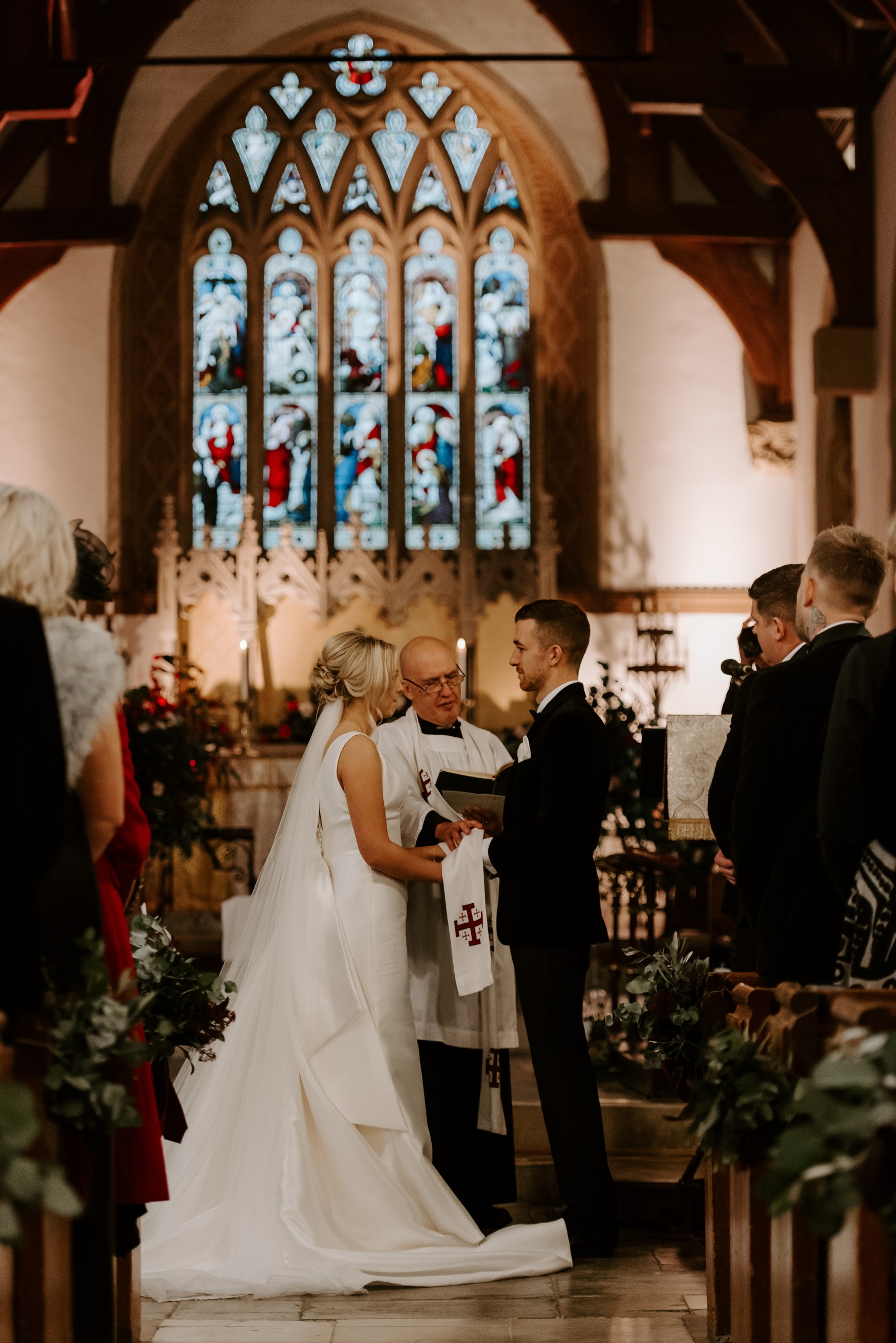 The best moment of your day?

Waiting at the end of the isle knowing that he was down there and that I was about to marry my childhood sweetheart (as cheesy as that sounds, we have been together since I was 16 and he was 18) was the best moment of the day for me! I was so excited and happy and couldn’t stop smiling. It was amazing when I saw him at the end.

My maid of honour was also amazing and kept making Sam and I stop and take everything in. This made the whole day feel real. I think without that it would have flown by and felt surreal. 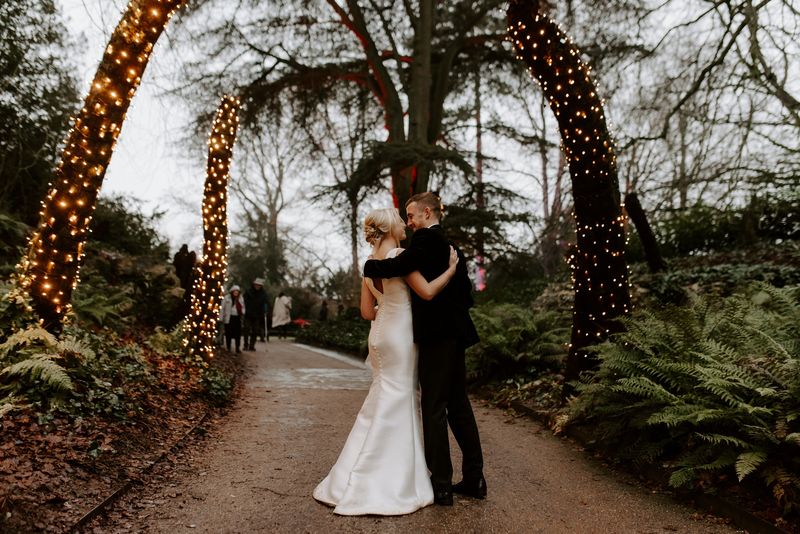 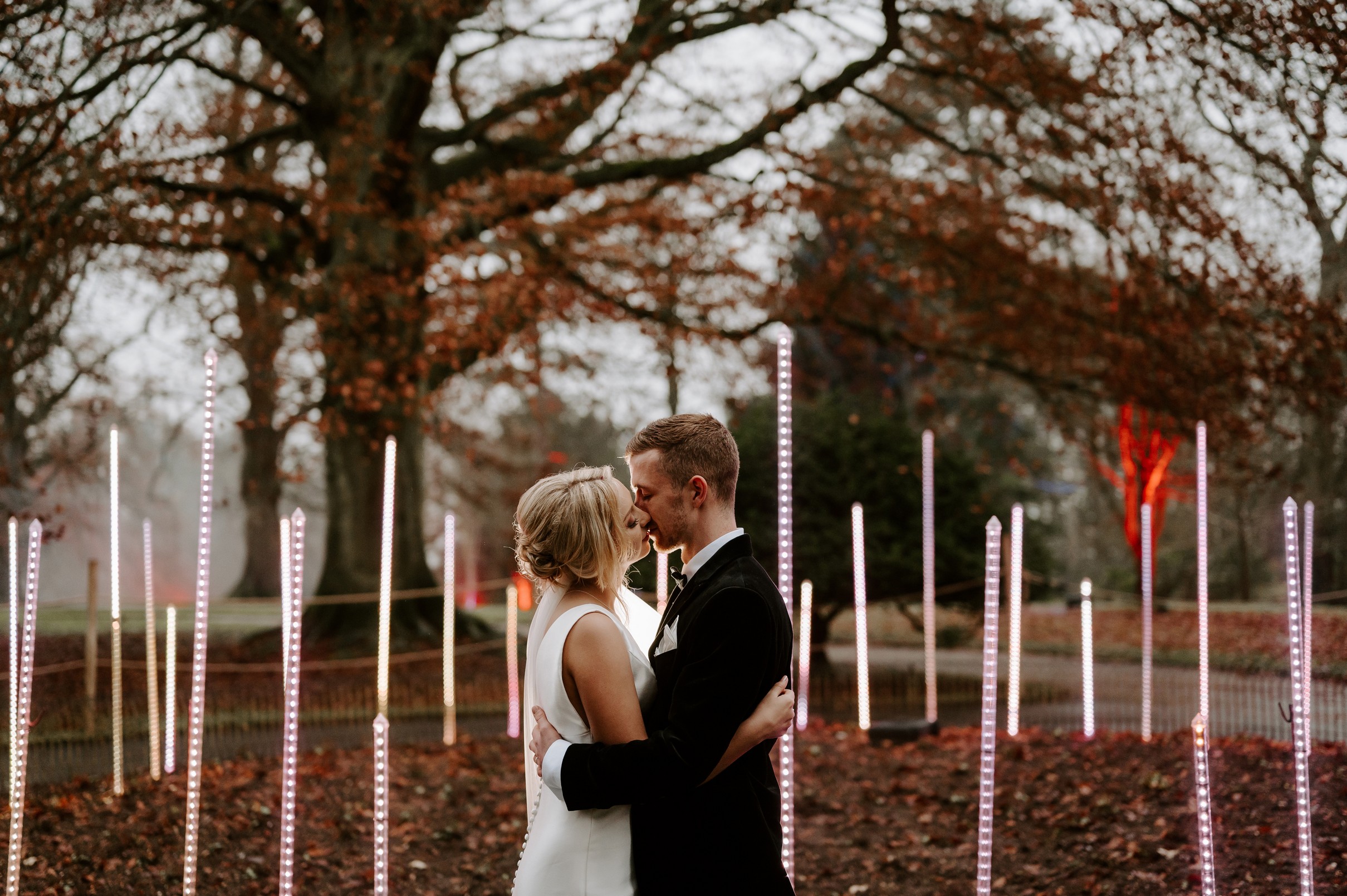